Home » New Asia can be achieved through women empowerment. “We will do it!”

The main focus of the meeting was placed on the campaign for “the stop violence against women” and creating opportunity for exchanging the experience on the campaign among the 2 regions. This committee meeting was also for initiating our regions’ preparation for the 4th women assembly of La Via Campesina and 6th conference of La Via Campesina that will be held in 2013 in Indonesia, Asia.

The meeting started with the welcome remark of Yoon Guensoon, the International Coordinating Committee of Southeast Asia and East Asia Region. She stated that “it is important to grow the power of the women in each country for Asian development. New Asia can be achieved through women empowerment.”

Ms. Elvira Baladad from PARAGOS Philippines showed us with some brutal photos how the violence against women are done in today’s world. She emphasized with anger that “the violence against women is happening everywhere no matter what religions and culture you are in,” and Via Campesina has very important role to organize movements in local, national, and regional level.

The delegates were divided into 3 groups to list the issues and solutions in local, national and regional level. “We have the law, but it is not implemented” “We need to expand the access to education for women.” Many similar issues and ideas were heard from the 3 groups.

On the 2nd day the 6th of Dec, in order to further exchange the diverse experience in the two regions, national reports on what has each organization actually done to stop the violence against women was presented. In this session, the campaign for protecting native seeds and food sovereignty are also considered that it contributes to empowerment of women.

In the afternoon of the 6th, the delegates left Hanoi for visiting the villages in Hoa Binh province, where 70% are farmers, to have exchange meeting with the local farmers. We were welcomed by the villagers and the vice-chairperson of the Vietnamese National Farmers Union of Hoa Binh Province. Next day in the field trip we visited another village where women farmers also earn money from embroidering. We also visited the VNFU office of Hoa Binh to learn about the roles of the provincial office.

Learning from the national reports, exchange between the participating organizations and the visits in rural areas, Asian Women Committee made a declaration and action plans for 2012. 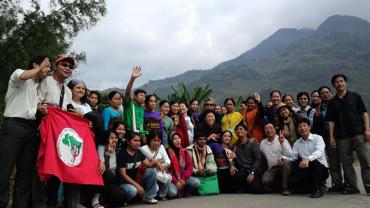