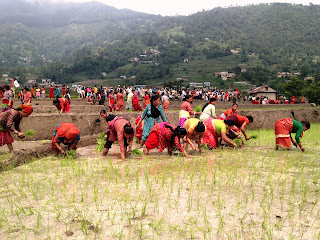 June 29: The All Nepal Peasant Federation (ANPFa) organized a massive rice plantation program in 35 districts of Nepal on Ashar 15 to celebrate Rice day.  Ashar 15 is the auspicious day for paddy planting in Hindu culture where peasants start the day by planting rice and then follow up with a feast of curd and beaten rice (Dahi Chiura). Some of the notable celebrations took place in Kathmandu, Kailali, Jhapa, Dhading, Kaski, Nuwakot and Kavre. The Former Prime Minister of Nepal J. N. Khanal started the celebration of the peasant festival in Nuwakot.  Peasants planted rice throughout the day and demanded that Nepal’s rice fields be protected from land grabbing and conversion, given that rice is the staple food crop of Asians and holds a deep cultural significance. They also demanded that only agroecological farming methods, or ecological agriculture based on biodiveristy (BEA) be promoted and the land be protected against hybrids and chemicals. The special program was attended by thousands of peasants as well as senior peasant leaders such as the former deputy prime minister of Nepal, Bam Dev Gautam, President of National Co-operative Federation, Keshab Badal, deputy general secretary of ANPFa  Balram Banskota , and Secretary of ANPFa Hari Parajuli.

The Rice day of this year also doubled as the national peasant’s day and was characterized by the slogan of “Save the rice field and stop land grabbing!” ‘We peasants are born in fields, we grow up playing with and die in to the same soil, but our land, our fertile soil are under a big threat, thus we all should be a part of a campaign to save our fields’ said Prem Dangal, General secretary of ANPFa. Most of the speakers in the program focused on the degradation of rice fields and its conversion to unproductive concrete buildings. ‘If we lose the fertile lands of the valley and riverside at this rapid rate, one day we will be in a deep food crisis ‘- highlighted the chairperson of ANFPA.

ANFPA has been celebrating June 29 (Ashar 15) as the national rice and peasant day for many years.  Ashar 15 is a landmark day for ANPFa and their celebrations typically involve dancing, singing folk songs, celebrating peasant culture besides the planting of rice. The government of Nepal also organizes programs to celebrate this day and  has considered Ashar 15 as the National Paddy Day since 2004.