Impressions from the International Conference in Nepal

An International conference on food sovereignty, agrarian reform, and peasants’ rights was held on August 29th to 31st in Nepal, a country well-known as the mecca for international climbers. Yoshitaka Mashima (vice-chairperson of NOUMINREN), Ayumi Kinezuka (vice-president of NOUMINREN youth division, also an interpreter), Masaaki Sakaguchi (secretary general of SHOKKENREN) participated in the conference under the invitation of the All Nepal Peasants’ Federation (ANPFa) and La Via Campesina. 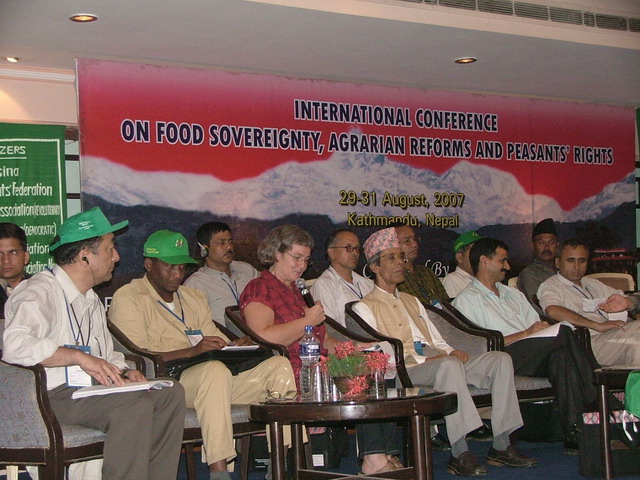 In Nepal, the despotic kingship was overthrown in April 2006, and the government is currently democratically run by coalition of political parties, which were once the target of oppression. The interim constitution, which was introduced in January 2007, declares sovereign rights of people and includes a line “all people have food sovereignty” for the first time in the world history.

The objectives of this international conference were to lay the rigid foundation of the flow for food sovereignty before forthcoming election for the Constituent Assembly this November and to “strengthen international solidarity in order to expand the experience of Nepal throughout the world.” (extracted from the speech by Mr. Henry Saragih, International Coordinator of La Via Campesina). The conference was organized by Nepal Peasants’ Coalition, which is a network of nine peasants’ organization in Nepal, and La Via Campesina.

Along with Japan, there were international participants from 14 countries of Asia, Latin America, Africa, and Europe. Mr. Henry Saragih, Mr. Jose Bove, Ms Ingeborg Tangeraas and Mr. Paul Nicolson represented La Via Campesina. There were more than 300 participants from Nepal, and a large proportion of women’s participation was notable. The Foreign minister, the Agriculture and Co-operative Minister, the Forest and Local Development Minister, and representatives from major political parties also attended the conference.

“We shall overcome someday!”

The report by Mr. Bamdev Gautam, Chairperson of ANPFa and Ex. Deputy Prime Minister, was outstanding.

In his speech, Mr. Guantam revealed that out of 25 millions Nepalese populace, 80% is peasants that is 16.5 millions people are peasants and about three millions people are landless peasants, and 15 millions people are under hunger and malnutrition. He continued to report how Nepalese peasants movement have organized its struggle against the despotic kingship over the last 55 years in order to overcome these problems and succeeded to include food sovereignty in the Interim Constitution through solidarity with international peasants’ movement.

At the same time, he pointed out that continuous struggle against external forces of WTO and TNCs as well as landlords and comprador capitalists is necessary, and unity with wide-ranging social sectors and strong international solidarity in order to enact food sovereignty by law is the objectives. He concluded by asserting, “We shall overcome someday!”

Foreign Minister and chief guest of the ceremony Madame Sahana Pradhan expressed that such conference played a significant role at an important time when food sovereignty is included in the constitution of Nepal but the specific policies to implement it are not framed yet. Similarly, Forest and Local Development Minister Mr. Dev Gurung called international peasants leaders to strengthen the peasant community in Nepal and help to achieve Food Sovereignty.

Denounce Japanese government for its reverse action to food sovereignty

Due to a breakdown of aircraft, the Japanese delegation’s arrival was delayed. When we arrived finally, awaiting participants asked us to speak at many occasions including group discussion, plenary, and press conference. In the presentation, I (Mashima) denounced the reverse action to food sovereignty taken by the Japanese government as following.

＊Japanese Business Circles and the government plan to liberalize completely the import of agricultural products which will cause sharp decrease in grain sufficiency rate from current 27% to 2.7%.

＊Japanese population accounts for 2% of the world population, and it is buying up 10% of the food in the world today. And this figure will increase to 30% if Japan liberalizes its import.

＊Agrarian reform, which we are very proud of, was implemented after the World War II in Japan. Today, there is a strong maneuver to reverse its achievement.

Under these circumstances, I introduced SHOKKENREN movement, the wide-ranging network to protect food and agriculture in Japan, and expanding movement of direct sales and local consumption as “an alternative distribution.” And these actions we taken to become the foundation of our struggle against any reverse actions to food sovereignty.

After the conference between September 1st to 2nd, there were exposure visits to three peasants’ co-operative. We traveled along headwaters of the Ganges from the Kathmandu valley to the Terai plain in the southern part of Nepal.

At Kumpar Dhading, two-third of villagers are the members and have shares. They explained their activities such as the promotion of organic farming, a small store to sell their products, joint sales to the city market and so on. Their direct marketing eliminates the commission of the middleman and serves to sell all the agricultural products of the members. A suspension bridge is the only access to the village from the main road. Therefore, it is a very important task for the co-op to help the sick to go to the hospital, build school in the community, and provide water supply.

In addition, the co-op provides finance to protect its members from loan sharks; it also offers workers’s accident compensation insurance. It was very impressive to hear a young stuff spoke with great confidence that “All of our work is to improve livelihood of peasants, and I cannot explain every thing we do in such a short time.”

In the evening, we visited another co-op of indigenous people. They were waiting for our arrival from the morning, and welcomed us with dances.

Even though I could not see Mt. Everest nor Annapurna because of the unfortunate weather, superb view of rice terrace cultivated skywards impressed me and showed me the hard work of Nepalese peasants.

When I visited Kalimati Market in Kathmandu, I saw great varieties of colorful vegetables, fruits, as well as tofu and soybeans, which gave me homely feelings.

The per capita income is lowest in South Asia at US$310. Despite the image of extreme poverty associated with this figure, I gained impressions of refined peaceful villages and humble but graceful daily lives of people through my visit of Nepal.