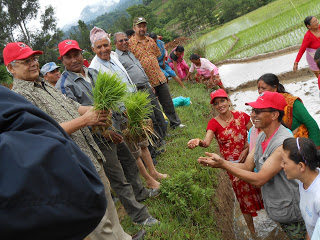 This day has been recognized by government as national paddy day and the government of Nepal also organizes program where ministers and high ranking government officers attend the paddy seedling program. Govt. of Nepal has considered Ashar 15 as National Paddy Day from 2004 and this year it marked its 10th Anniversary but ANPFa has been celebrating this occasion since a long.

ANPFa chairperson inaugurated the program in Kathmandu handing over the rice seedling to the women peasants. In his inaugural speech, he shared that, ‘agriculture is the backbone of Nepal and rice is the staple crop. Not only in Nepal but also in other Asian countries, the rice is our culture and basis of life. Therefore to ensure right to food and food sovereignty, we need to fight against all threats that destroy the rice fields and displace the farmers. We should defend our culture and territories.’ Mr. Gautam who is also the former deputy Prime Minister and chair of the national peasant coalition of Nepal ( and the farmers forum) highlighting the ANPFa struggle to pressurize the government for peasant friendly policy and program said that government has positive response to increase the budget in agriculture.  In this occasion, the Chairperson also informed about nationwide campaign of ANPFa to save local varieties of rice and conserve rice culture. ANPFa has been also launching a campaign against land grabbing in South Asia to stop grabbing and conversion fertile land- he informed. The participants in the program also enjoyed eating beaten rice and curd (Dahi-Chiura) and singing folk songs (‘Ashare Bhaka’/Ropai song)  which is also integral part of this festival of peasant.