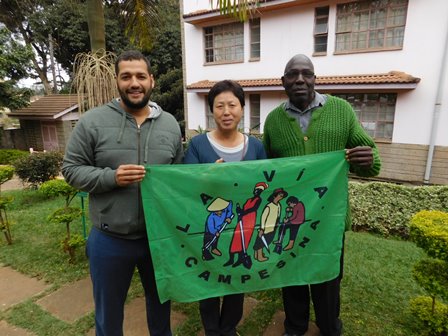 La Via Campesina joins other social movements in Nairobi to mobilise around the United Nations Conference on Trade and Development (UNCTAD) 14th Session. The session started in Nairobi, Kenya, from 17 to 22 July 2016 under theme: From decision to action: Moving towards an inclusive and equitable global economic environment for trade and development.

As UNCTAD set the parameters for its work over the next four years, we call upon the governments to consider that this agenda should not widen further the opening of developing countries markets for corporate gains. It should be about what millions of peasants, family farmers and women and youth want: access to reliable and remunerative markets for their produce and policies that promote local food procurement which benefits the local farmers and create employment. Food sovereignty should be the guiding principle to realise a development agenda that is based on justice, fairness and equity to address persistent and emerging economic challenges.

La Via Campesina and various Kenyan civil society organisations, call for a development agenda that protects local markets where the food concerned is produced, processed, and traded and consumed. The value adding processes help to create employment and contribute to local social and economic development only when the benefits of such value addition are circulated within the local markets. The local markets allow farmers and the food buyers a platform for social interaction and exchange of knowledge between the producers and consumers.

The outcome of the 10th WTO ministerial held last December 2015 in Nairobi, Kenya, was a betrayal of developing countries and of the millions of peasants who produce over 80% of the food we eat.  UNCTAD should not follow a similar path. Maintaining and promoting the current multilateral trade and development system will not help end poverty and other injustices socially and economically – instead would exacerbate them further.

We welcome the 2015 UNCTAD publication on “Smallholder Farmers and Sustainable Commodity Development” recognizing our role in food production and markets but strongly oppose its numerous recommendations to integrate into global markets controlled by corporations.

We call on UNCTAD and the member states to prioritize democratic and participatory processes aimed at policies that successfully promote food sovereignty, not Free Trade Agreements (FTAs) and the European Union’s Economic Partnership Agreements (EPAs) in Africa.