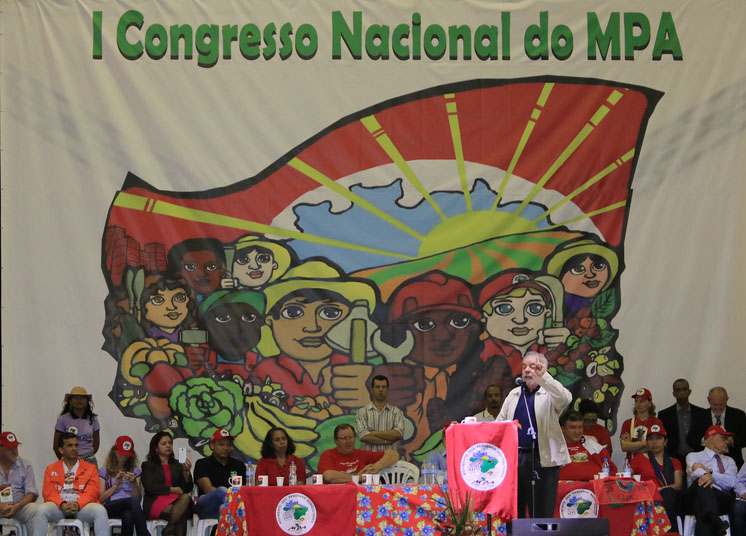 More than 4 thousands people, from all Brazilian States, have left their homes and farms to join caravans from different regions of the country towards Sao Paulo, to attend the First National Peasants Congress of MPA, the Small-Farmers Movement of Brazil, member of La Via Campesina. The symbolic Pavilion of Vera Cruz, the same place where the biggest trade union in Brazil, the CUT, and the Workers Party (Partido dos Trabalhadores) were founded, decades ago.

MPA has mobilised thousands of rural women and men to come together and consolidate all the work the movement has been doing in the last 20 years and reaffirm their class identity as peasants. MPA is re-affirming at this congress the strategic alliance between rural peasants and urban workers.

“This congress has the task to put together what we have built so far in various areas such as health, food production, work on seeds, youth and organisational strengthening. Now, we want to take a great step and consolidate our understanding as a peasant class that we need to articulate with the workers class”, said Isabel Ramalho, from MPA National Board.

For Deolinda Carrizo, representative of CLOC-Via Campesina, this Congress represents the strength of an organised peasantry, not only in Brazil, but in the world.

“This congress represents the struggle for Food Sovereignty, represents the call and action in defence of land, in order to fulfil the social mission of feeding the world. It is an inspiring event”, said Carrizo.

Former Brazil president, Inacio Lula da Silva, attended the opening of the Congress. Lula started by stressing that the congress is a gold moment in the history of Brazil. In his speech, Lula reminded the participants that the Peasant (and workers) struggle is not only a struggle for land and food. “As small-scale producers you are a social, economic but also political agents. Your struggle is in fact a political one”. Lula said that, to call on Brazil Social Movements to take clear positions when it comes to defend what he called “social revolution” that Brazil is reported to have achieved in the last decade, by alleviating poverty in millions of people. Lula mentioned the Bolsa Familia programme that is believed to have taken 36 million people out of poverty in ten years.

One of the “achievements” Lula and the current minister of agrarian development, Patrus Ananias, spoke about in the opening of the Congress is the famous Food Purchase Programme, in Brazil known as Programa de Aquisição de Alimentos, that requires that municipalities and federal facilities (hospital, military headquarters, prisons, university restaurants and care centres) purchase at least 30% of the total supply of foodstuffs from small-scale family producers.

“This program is a clear signal that our government is strongly committed to your work as small-scale producers”, stressed Lula.

Although acknowledging the efforts of the former president’s government in the social transformation, Isabel Ramalho of MPA seems not to be completely impressed.

“It is true that so many people came out of poverty in Brazil, but social and economic inequalities are still scaring. Solving individual problems is not enough. We need a structural transformation in this country”, she said.

Mobilizing the peasantry to challenge agribusiness

MPA is mobilising peasants to take the task of building a peasant agricultural project that fights and challenges the agribusiness model that is still powerful in Brazil.

“This same government has also allowed the progress of the capital and of the agribusiness model”, said Isabel Ramalho.

Brazil is one of the top agribusiness drivers in the world. The country has become the world´s top agricultural exporters. In 2012 Brazil surpassed the United State as the largest buyer of pesticides for its agriculture.

Agribusiness, which includes biofuels, is responsible for 27% of the country’s GDP and corresponds to at least 37% of the Brazilian export.

The First National Congress takes place in a context of a political turbulence in Brazil. The gains that former president Lula talked about may risk being eroded Brazilian President, Workers Party Dilma Rousseff, is facing strong criticism from conservative right wing sectors. In the last years, many street protests called even for the impeachment of President Dilma Rousseff.

Brazilian social movements, however, have taken the stand to support Dilma Rousseff since, although not always satisfied with the government policies, “we should not allow a step back on what we have achieved in this country”, said Willian Clementino, from National Confederation of Farmworkers.

The communication team of the MPA Peasants Congress