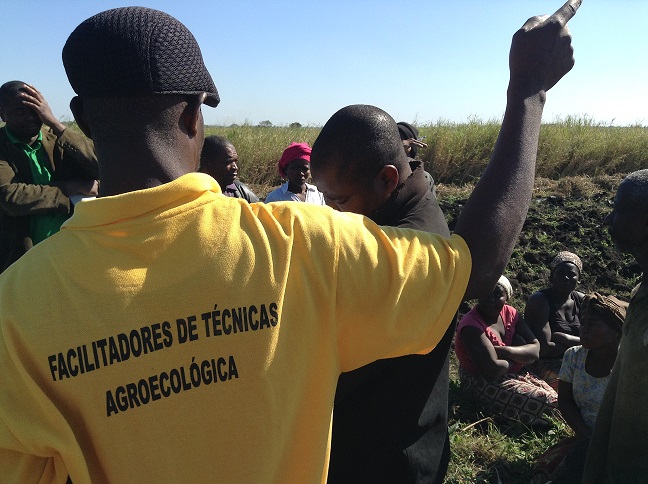 (Mozambique, Maputo, July 11, 2014) – the adopted agroecological farming methods are there to stay among the farmers in Marracuene, south Mozambique, says the farmers from Alfredo Nhamitete’s farming Association, which is part of the National Farmers Union (União Nacional de Camponeses — UNAC). This resolve resulted from a knowledge exchange visit between the local farmers and the visiting members of Zimbabwe’s Smallholder Organic Farmers Forum (ZIMSOFF) and La Via Campesina, on July 9.

The 280 association members produce different food crops such as yam, carrot, cabbage, onion, kale, beans, lettuce, eggplant, among others. Part of the produce is sold at the local market, and the earnings are equally shared among the members. “With that money I can send my children to school, and buy them school supplies”, said a woman farmer, and member of the association.

UNAC provides technical support to this association, which enables them to practice sustainable, cheaper agroecological farming methods. The ZIMSOFF and La Via Campesina delegation visited a demonstration and training camp in Marracuene where the local farmers meet once a week to learn and perfect their farming skills. Equipped with such skills, farmers have improved their agricultural output, both the quantity and quality. “The production results are excellent. Some people are surprised by the quality of my farm’s products. They say I’m a sorcerer”, said another peasant woman, and member of the association.

ZIMSOFF chairwoman, who also is the General Coordinator of La Via Campesina, Elizabeth Mpofu was very pleased with Marracuene’s experience and the role women play in the associations’ leaderships.

According to Mpofu, UNAC should reinforce the support it provides to peasants’ associations, not only at the technical level, but also at the political level.

UNAC chairman, Augusto Mafigo, who accompanied the delegation, said that the benefits of agroecological farming products to consumers should be highlighted to promote increased consumption at a local level. “We must tell people that our products come from local farmers. That they are produced using agroecological methods, and have great health benefits. Consumers need to understand all the advantages”, he added.

I love the land…

The farmer Emanuel Jaime David, a member of the association Alfredo Nhamitete’s farming Association, told our LVC Africa News team that he resisted the fertilizer companies’ propaganda, and has never used chemical fertilizers to produce food because he knows that they damage the soil.

“I’ve been a farmer for 38 years, and have never used chemical fertilizers in my land, because I know they destroy the soil. I love the land and its bounty. I have to take good care of it”, he said.

According to Elizabeth Mpofu, the availability and use of local seed varieties is crucial to a successful agroecological production. She further stressed that besides being cheaper and increasingly relevant in the current context of climate change, the traditional varieties are culturally and socially adaptable.

The National Farmers Union is running a program to produce and conserve traditional seeds in partnership with the Movimento dos Pequenos Agricultores from Brazil. This program, which started in 2012, aims to develop these varieties and strengthen peasant agriculture in Mozambique.