Nyéléni, Mali – 19 November 2011 —The National Confederation of Peasant Organization’s (CNOP) agroecological training center stands at the crossroads of the West African countryside. Surrounded with rich Malian farmland and dotted with white thatched-roof huts, the Niger River snakes into the horizon on one side, and a dusty road connects the property to the sleepy town of Sélingué. Today, well into the first International Peasant’s Conference, the center was buzzing with activity as peasants from across Africa and around the world worked together to envision communities where land is more than a commodity. 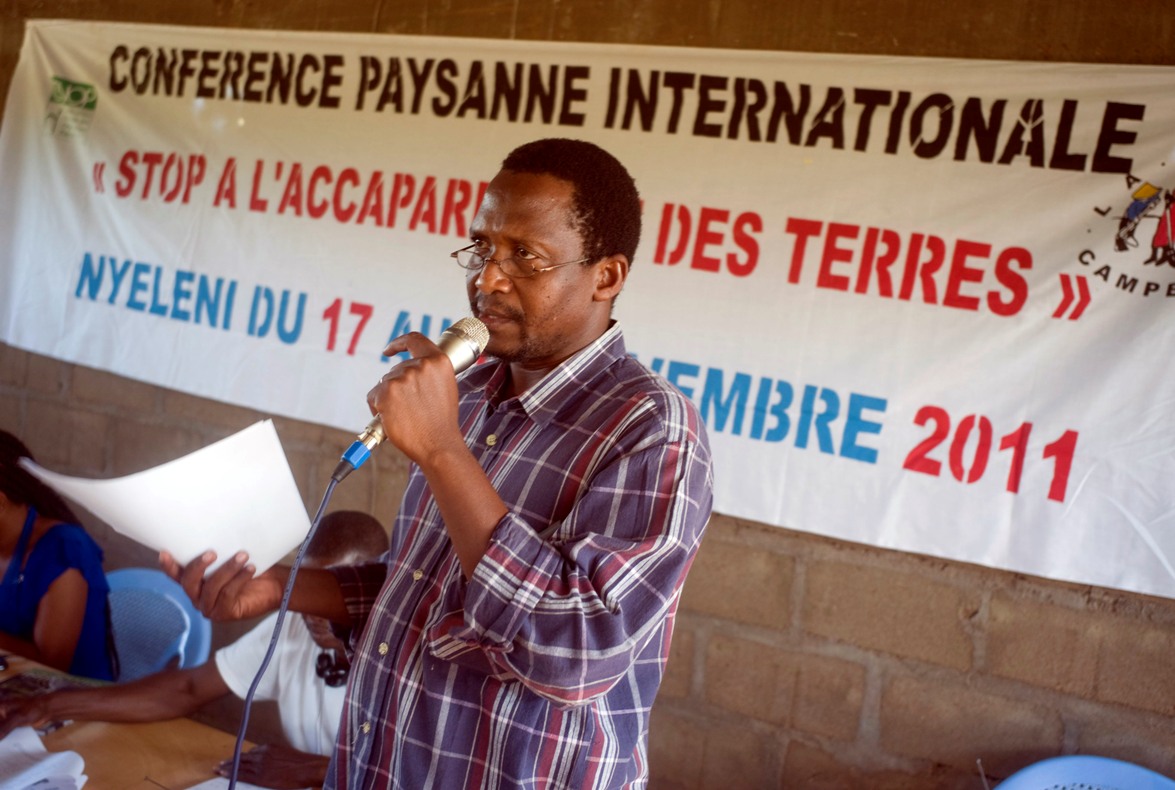 “This is the kind of awareness-raising that has the potential to change policy,” said Ibrahima Coulibaly, CNOP’s president and a Via Campesina leader. “As local and national movements, we need to fight together against the global structures that threaten our communities,” he added.

Over the course of the day, peasants outlined the enormity of their struggle against those international structures—ranging from misguided pension funds to the innermost workings of financial institutions like the World Bank and the World Trade Organization. Following the financial crisis, pension and other investment funds have increasingly put their money toward natural resources and food—commodifying historical rights to land and water.

“It’s the international institutions that deny us access to the common good, and threaten our ability to plant diverse crops that feed world,” offered Rafael Alegria, a Honduran Via Campesina leader. “And the only way that we can work against them and avoid becoming refugees on our lands is as a united movement.”

Via Campesina has already seen victories of the sort. In the mid 90s, representatives of their base organizations demonstrated at World Food Summit. Later, they were allowed inside once-closed doors where they observed decision-making processes, while still mounting pressure from the outside. After years of counter summits, Via Campesina has been given a voice that allows them to be a part of framing the debate and defining a global agenda.

“We hope that by the powerful participation of social movements, we will bring the food sovereignty agenda to the UN,” said Sofia Monsalve, a human rights expert with Food First Information and Action Network (FIAN). Via Campesina—credited with coining the term “food sovereignty”—has been determined to rethink the global notion of food security from its very origin.

But peasant movements concur that in the absence of control over their lands, real food sovereignty is impossible.

The cash-strapped Malian government, for example, has already allocated at least 750,000 hectares to multinational corporations for large-scale agricultural projects—much of which is reserved for export. And more than 40% of those deals involve crops like Jatropha for agrofuels, feeding foreign machines instead of local people. Investors are offered attractive fiscal incentives and in some cases, first access to water from the Niger River. Entire communities are displaced while water resources and food supplies become increasingly vulnerable.

Delegates from dozens of countries shared similar statistics, and personal stories, from their own countries—where their indigenous lands have become magnets for foreign investors. By first shedding light on these David vs. Goliath struggles, their forum provides a space to come up with unified solutions to put an end to the new form of colonization that is land grabbing.

“We are decolonizing Africa here,” said Elizabeth Mpofu, a peasant woman from Zimbabwe. “Our job is to come up with democratic declarations at the grassroots level. It’s up to us to make sure that they reach our governments, and that they can be shared with all stakeholders—including at the international level.” She recognized the enormity of that task, but at the same time felt empowered by her counterparts from five continents.

At CNOP’s open-air training center in Nyéléni, Ibrahim Coulibaly stood in the coarse sand, bright green Via Campesina flags hanging behind him. “Let’s start,” he said, opening yet another session, “We have a lot of hard work to do.” But for a brief moment, he paused, looking out over the diverse crowd of peasant leaders. Then he raised his voice and smiled. “There is so much energy here,” he beamed, “What an atmosphere.”