Hidden behind the showcases of Moroccan food and cosmetic exports is the abject poverty of a million women and men agricultural workers. These workers have been reduced to a contemporary form of slavery; they are organising in a daily struggle to obtain their rights and to safeguard their dignity.

The case of the women and men working at “Les Arômes du Maroc” stands out. These women, who come from peasant families and who have worked for decades picking aromatic plants, fruit, and blossoms, live in extreme poverty. They are subjected to practices reminiscent of the Middle Ages that one would have expected to belong to the past: forced labour, wages below the Minimum Guaranteed Agricultural Salary SMAG (5.63 euros) and even below the poverty line, over-loaded work days, the loan of workers to other businesses, etc.

The company uses a pay system, prohibited by law, which is a combination of salaried work and piece work. Wages are based not on the number of hours worked but rather on the weight of the produce that has been picked. By setting goals that are impossible for pickers to reach, the company keeps workers’ pay below the minimum wage.

In addition to their “contractual” work (there are in reality no work contracts), the women are obliged to perform other cleaning and picking tasks, for all of which they receive the paltry daily wage, as we have been able to verify by their pay stubs, of 1-5 dirhams (1 dirham = 0.08 euros).

In the words of one of the women: “So as to keep our jobs we are obliged to perform other tasks and chores such as cleaning. We work all day picking blossoms, which are very light and must be handled one by one. In the best of cases, the weight picked is no more than one kilogram per person per day, although, in order to be paid the salary for a day’s work, we are expected by the company to pick 50 kilograms. This means that what we receive is a fiftieth of the minimum daily wage.” Between contract work, over-time work, and the time that is spent waiting for wages to be paid, work days are as long as 14 hours for a salary that does not cover the cost of living. Added to this are other scandalous practices: the women workers are lent to the neighbouring farm of an Emirate prince – without being provided with any means of transportation to get there; safety equipment (to be used, for example, when climbing trees or handling plants with thorns) is non-existent. 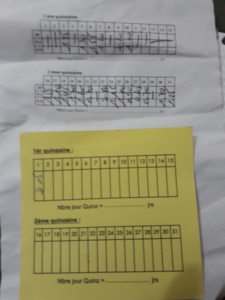 The pay stub from a woman working for the company “Les Arômes du Maroc” at Maaziz. The amounts refer to day wages in dirhams.

Furthermore, women and men workers are denied their right to a retirement pension. Older workers go on working. A man who had reached retirement age, after working for 30 years, was surprised to find out that he had not accumulated the 3240 officially recorded work days that are a prerequisite for receiving a pension. The company had “omitted” to file his name with Social Security, while still “retaining” his pay deductions. The other workers were upset by this discovery, and after checking they found that his was not an isolated case. “With no pension or seniority bonus, I am forced to work like a young man but I no longer have the strength,” said one elderly worker.

Thus, on one hand, the company is illegally depriving its workers of participation in the general National Social Security regime. On the other hand, the workers cannot benefit from the Medical Assistance Regime (Ramed) Fund, a medical security plan for the poorest people, for which the working poor are ineligible.

They are left, therefore, with no coverage in case of illness – and still less in the case of work-related illness. One of the company’s women workers stated: “I went back to work right after having a mastectomy. I paid for all of my treatment, and I had to depend on charity in order to do so.” Out of fear of losing their jobs, some women hide their pregnancies as long as possible (flattening their stomachs with a belt!) and they return to work just after their babies are born: “They refused to give me maternity leave. I took my newborn with me to work; he had to go to work too,” said one woman sarcastically. At the national level, no more than 22 % of agricultural workers are registered with Social Security, and of that percentage only 30% are registered for the full year.

Traffic accident involving women agricultural workers near Agadir (in the south of Morocco) in February 2017. The outcome: 2 women killed and many injured. Source:Soltana.ma

Everywhere in the country, transportation for workers is a serious problem. Most of the time women workers are crammed together, standing up, in freight trucks, with no regard for safety regulations. Every year, many women are killed and dozens of women are injured, or become disabled, as a result of the frequent accidents.

If these sorts of practices continue to exist without being talked about, it is because they involve a topic that is taboo. The owners of the company are none other than the royal family.

The company belongs to Domaines Agricoles (Agricultural Domains), which until 2011 was called Domaines Royaux (Royal Domains). A trade unionist from the FNSA explains “Within the framework of the agrarian reform programme, some land belonging to the State has been transferred to the private sector in a “public private partnership” (PPP). Whether in terms of amount of land or soil quality, the royal family had the lion’s share. Social considerations such as stable employment, respect for labour laws, and the protection of agricultural workers’ social benefits are not included in regulations concerning land redistribution. 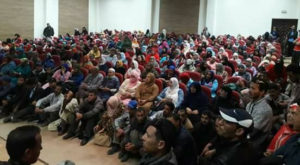 In 2003, in response to pressure by FNSA trade unionists, the regulations were revised; however the revisions were never really put into effect. The Agricultural Development Agency (ADA), the authority which supervises State land that has been transferred to the private sector, has no deterrent power. In cases of proven violations having to do with investment or social legislation, the ADA is dependent on a justice system that is incapable of confronting the giants of the private sector, which have close ties to the centres of economic and political decision-making.

Faced with predatory agricultural companies, an inadequate and non-functioning legal framework, a justice system that is completely dominated by capitalist interests, and a bureaucratized trade union movement, the FNSA has searched for other ways to struggle. The year 2011 was particularly noteworthy: the winds of change blew over all of the Middle East and North Africa. The women and men workers waged a long battle against the Domaines Agricoles in a number of regions of Morocco. As organised members of the FNSA, they carried out sit-ins and protests for many months. The FNSA established alliances within Moroccan political and civil society: the Moroccan Human Rights Association; democratic forces; student unions; international organisations; the media, etc. “We have made a major effort to support the cause of women and men agricultural workers. Our allies have helped to us to give national and international visibility to this cause. Although the demands do not go beyond what is already established by law, they have been met with severe repression. The workers’ strikes were broken up by the security forces and many people were injured. Article 288 of the criminal code was used to prosecute and imprison the strikers.” This article categorizes strikes as “obstacles to the freedom to work” punishable with prison sentences ranging from one month to two years.

However, changes have only been cosmetic. It is true that article 288 of the criminal code is no longer systematically invoked, but the company in question has put more effort into communications strategy than into improving working conditions. “We grow and process the most prestigious plants, while showing complete respect for Man and Nature,” it states on its web site.
The FNSA is betting on an increased awareness among agricultural workers, the great majority of whom are not unionised or have lost faith in trade unions that have become tarnished by bureaucracy and opportunism. When the women workers of the “Arômes de Maroc” operation at Maaziz decided to form a union in 2016, they came up against a union bureaucracy with ties to the politically powerful. On their second attempt, they met with the FNSA, and, despite intimidation, they were able to create the union office. After a year of struggle, they succeeded in keeping their jobs – and their union office. In the words of a union spokesperson, “The agricultural workers sector is very difficult. It involves a rural social class that is in a precarious situation, in a country where, both during and after the colonial period, rural areas have been qualified as “the Morocco that serves no purpose.” Their opportunities for work and a regular income are scarce.

Intimidation and the threat of losing their jobs discourage them from joining trade unions and acting in defence of their own interests. Agricultural businesses campaign to discredit unionised workers, who, the businesses allege, are setting a bad examples for the rest of the work force”.
Managing to keep their jobs and their union office is in itself a victory for the FNSA activists. In very many cases, the members of agricultural workers’ union offices are dismissed from their jobs as soon as the creation of a union office is announced. Thus, at the national level in 2017, the rate of unionisation of agricultural workers was no higher than 0.5%.

What will come next ? “As far as the situation of the women workers at “Arômes du Maroc” is concerned, we are going on the offensive at Maaziz. At the national level, we will increase our efforts to organise women agricultural workers and to provide them with training, and we will continue to denounce the abusive treatment to which they are subjected. Our objective is to quadruple the number of unionised women workers in the next five years,” stated the Secretary-general of the FNSA. The Federation has organised a massive letter-writing campaign to denounce the scandalous working conditions. Letters with thousands of signatures have been sent to the officials concerned – letters that have received no response. The Federation and the women workers themselves have come to the conclusion that only a strong and organised trade union can win respect for the rights of workers and safeguard their dignity.