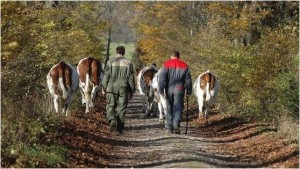 (UK, August 12, 2012) In the light of the current collapse in milk prices the Land Workers Alliance has issued the following policy statement.

The Alliance Landworkers supports the protests against the collapse in milk prices organized by Farmers For Action in Britain, and by numerous farming organizations throughout Europe, including Via Campesina.

Many members of the Landworkers’ Alliance who produce milk and dairy products are not affected by the collapse in prices because they process and sell their milk directly through local outlets. However the LWA wishes to see a thriving mainstream dairy industry based on small-scale family farms, and supports measures necessary to protect such farms from the vagaries of the global market.

Simon Fairlie, who runs a micro-dairy in Dorset and is LWA’s spokesman for dairy issues, stated: “Today’s average sized dairy farm with 133 cows produces milk with a retail value of about three quarters of a million pounds. It is a staggering indictment of our economic system that we can’t even pay these farmers a living wage.”

The Landworkers’ Alliance opposes the strategy, supported by the House of Commons Parliamentary Select Committee on Dairy Prices and by the National Farmer’s Union (NFU), of targeting export markets for dairy produce in regions such as Russia, Latin America, India and Africa. A policy of dumping surplus milk produce on poorer countries will cause further gluts in supply and exacerbate market volatility. It will also threaten the livelihoods of millions of small-scale dairy producers in countries that are less well equipped to compete on a global market.

In particular we condemn the approach of the NFU which has argued “for the market to be liberalized” and has advised the government that there has been “an artificially high milk price within the EU, which has discouraged exports.” (2). The rock bottom milk prices which result from liberalization afford tiny margins per litre which can only be attained by industrial mega-dairies, whose proliferation will signal the end for the family dairy farms.

The LWA advocates the progressive relocalization of the milk industry. Milk is produced almost everywhere in the UK, yet it is currently shipped hundreds of miles around the country to centralized processing depots, wholesale depots and supermarkets. This results in pointless and unsustainable transport and cross-haulage, concentration of the milk processing sector amongst a handful of powerful corporations, and a lowering of the quality of fresh produce which has been partly responsible for a growing public backlash against milk and dairy products.

The LWA therefore calls for:

(2)  Evidence to the Parliamentary Select Committee on Dairy Prices, Jan 2015)

The Landworkers’ Alliance is a union of small-scale producers and family farmers who produce food, fuel and fiber. We are a member of the international peasant farming movement La Via Campesina that represents 200 million farmers around the world. We campaign for the rights of small-scale producers and lobby the UK government and European Parliament for policies that support the infrastructure and markets central to our livelihoods.