Home » March 14th: International day of struggle against dams, in defense of the rivers, water and life! 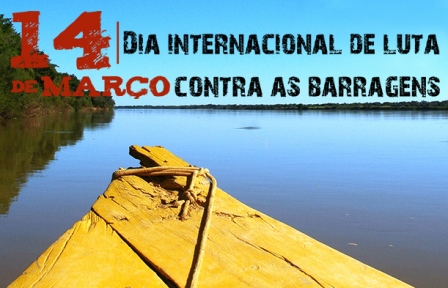 The Movement of People Affected by Dams (MAB) calls and encourages all organizations, pastoral, networks, activists and social movement to join the mobilizations that will mark the International Day of Struggle Against Dams, in defense of the Rivers, Water and life, which will happen during the week of struggles of March 14th.

(Brazil, March 6, 2015) This date was defined in 1997 during the 1st International Encounter of People Affected by Dams in Brazil. Since then at this date the dam affected population in the world denounces the hydro-electrical power sector which has caused serious social economic, cultural and environmental consequences.

The hydro power energy has become a central element in regaining the capitalist appropriation and production. The whole production chain of electricity, from the construction of hydropower plants to the generation, transmission and distribution of energy has become a source of profits and intense conflict, which features a real robbery of our natural resources.

Our commitment is to organize and struggle against transnational companies that take possession of our wealth, to struggle in defense of the workers’ rights, in defense of the rivers, water and life. The week’s events from March 14th will be held to seek solutions to the huge social and environmental debt left by the hydropower plants already built, to strengthen the struggle for another energy model and to move forward in joint actions among the workers of the countryside and the city.

We reinforce the importance of the unity of the struggle among the people of the world and the various organizations, strengthening the internationalism against the capitalist project. This struggle is not only of the people affected by dams but of all the people affected by the high cost of energy, by the privatization of water and affected by the reactionary right-winged coup that wants to destroy the worker’s achievements and rights, and more control over our natural strategic resources, such as petrol.

We emphasize the convocation that all should participate within the mobilizations happening in Latin America and in the other countries of the world at this March 14th. More than ever, we have to remain strong and organized to continue the struggle at local, national and international level, organizing the people affected by dams and all working class.

Our struggles go beyond this date of March 14th, our struggles must be permanent against the private transnational companies, the high energy prices, against the commodification of water and energy and in defense of the popular control over the richness generated by the workers.

Water and energy are not commodities!