Home » Manifest: Rights of peasants – a step ahead for the future of humanity 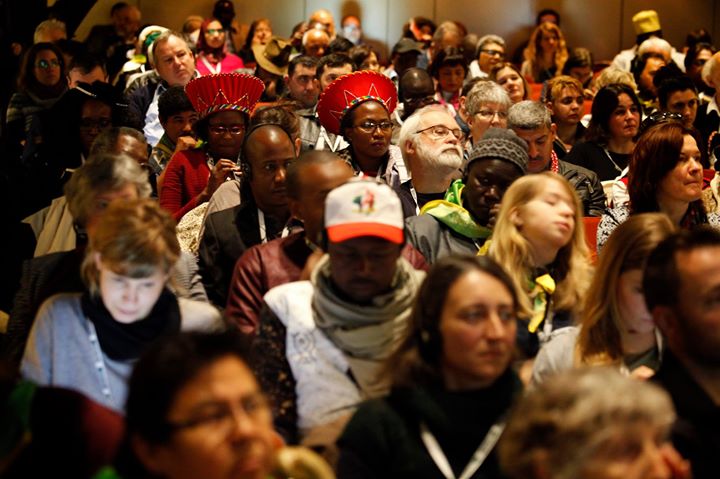 The International Congress on Peasants’ Rights, which took place from 7 to 10 March in Schwäbisch Hall, Germany, brought together close to one hundred peasants and representatives of food producers from all over the world,  along with the same diversity of human rights defenders and activists. The Congress concluded with the presentation of a Manifesto on the need for a Declaration on the rights of peasants and other people working in rural areas, a text that was finalized with the contribution of the participants to the event. Below you can find the full text.

Almost 500 years ago, growing encroachments on peasants’ common lands by princes and churches led to rural uprisings in Southern Germany and to the drafting of the peasants’ “Twelve Articles”. This document represents the first record of demands for human rights and liberties in Europe, and included the right to equal access to lands, forests and fishing grounds. Although the feudal lords brutally crushed this revolt, peasants kept resisting and showing that the feudal nobility hadn’t defeated them. History shows that when peasants are rolled back in one place they reappear in another one. Peasant revolts are still on-going!

The Global Peasants’ Rights Congress, taking place from the 8th to the 10th of March 2017, shows this. More than 400 peasants, fishers, pastoralists, beekeepers, indigenous people, migrant and seasonal workers, rural women, youth, food consumers, NGOs’ representatives, academics, lawyers, activists and government representatives from more than 50 countries gathered together in the city of Schwäbisch Hall, a hotspot of the 16th-century “Great Peasants’ War”, to exchange views, to learn and to increase awareness about the current process of drafting a United Nations Declaration on the Rights of Peasants and Other People Working in Rural Areas. This Declaration has roots in an initiative of La Vía Campesina launched more than 15 years ago. With the sponsorship of the Bolivian Government, the process has been rapidly advancing in the UN Human Rights Council and will now go to a fourth round of negotiations in May 2017. This week’s Global Peasants’ Rights Congress showed that while we come from highly diverse backgrounds, we are nonetheless able to join hands in defense of human dignity and nature. This process resembles a river, with an increasing number of tributaries, crossing different landscapes and flowing together in a mighty stream of life.

Yesterday’s oppressors today have new faces. Instead of feudal lords we now confront the weapons of capital:

Corporations, national elites and governments are grabbing our territories, including our oceans, and endangering our livelihoods, social cohesion, peoples’ sovereignty and peace. Whenever we are prevented from controlling our territories, food sovereignty is under huge danger. For pastoralists, especially, this amounts to disrupting their mobility and particular way of relating to their diverse ecosystems. Violence against our territories is closely interlinked with violence against women. Women suffer violence on their bodies and are not recognized as political subjects of transformation. Land concentration is sharply increasing everywhere, driven by a development and production model that destroys biodiversity and the environment and contributes to climate change. At the same time, the cessation of agrarian reform programs means that landless tenants experience new forms of slavery, ultimately leading to migration.

The absence of international mechanisms to manage migration increases the vulnerability of migrants and their communities. Especially women are often left behind with an increased burden of productive and reproductive labour. On the other hand plantation and migrant workers are heavily exposed to pesticides and have to do piece rate labour without job security; they are denied social security, prevented from organizing freely and are often vulnerable to be deported. Women and migrants are the most exploited rural workers.

Our animals are at risk as well of being grabbed by research centers and companies that apply for patents on their genetic traits. Trade agreements, the World Bank, G7 and so-called philanthropic foundations are forcing governments in the Global South to introduce industrial seeds and to align their laws with international regimes of intellectual property protection. Thus, peasants in Europe and other places are criminalized for saving and replanting seeds which fall under the protection of the UPOV convention. Our knowledge as peasants, livestock producers and beekeepers, our innovations and further development of biodiversity, suffer discrimination from proponents of the allegedly superior knowledge of science and academia. The intertwined and holistic relationship between our communities, our cultures and nature in our territories is violently disregarded.

Furthermore, we often lack access to means of production such as credit, infrastructure and insurance. We are deprived of access to markets, which, along with agricultural policies, are primarily geared to international trade. The market power of companies and intermediaries keeps prices for fish and other peasants’ products low. Former public local food markets are being privatized.

Finally, we are facing brutal repression. In many countries the media, in collusion with governments, manipulates public opinion against resisting rural communities and, more broadly, underpins a system of oppression and inequality. Whenever we stand for the defense of our rights, territories and livelihoods, governments physically and legally harass us. With the pretext of preventing terrorism, right-wing governments are criminalizing a huge number of social movement leaders using anti-terrorism laws. Furthermore, the worldwide rise of xenophobia, nationalism, racism, misogyny, homophobia, and transphobia is putting food sovereignty and people’s sovereignty at high risk and threatening our rural people’s identities.

In light of these common threats, we go out of this congress deeply convinced of the strategic importance of a UN Declaration on the Rights of Peasants and Other People Working in Rural Areas. This Declaration strengthens the legitimacy of our demands and makes visible our social, cultural and political values. It acknowledges our enormous contribution to ensuring collective well-being – whether through the provision of nourishing food or the development of biodiversity and the protection of the environment. It reaffirms our rights to land, water and natural resources, to seeds, biodiversity, food sovereignty, decent income and means of production, and their collective dimension. It contributes to the emancipation of women from patriarchal structures. It considers the importance of intergenerational thinking and knowledge transmission in rural areas. Ultimately, it recognizes that our collective future, and the very future of humanity, is bound up with the rights of peasants and other people working in the rural areas. The Declaration is an important tool for the struggle, compiling our rights in one instrument in a holistic and coherent way. It is creating a shift in consciousness and inspiring new law making. It can become a vehicle for the convergence of movements and struggles committed to larger systemic changes.

In order to achieve stronger support from states for this Declaration, participants in the Global Peasants’ Rights Congress call on all movements of the Declaration’s rights-holders — peasants, livestock producers and pastoralists, fishers, forest dwellers, indigenous peoples, rural artisans, traditional communities, among others — to build alliances in their local and national contexts, to keep resisting and to jointly mobilize. The struggles at the grassroots level are crucial for ensuring recognition and support by our national governments and for generating strong and broad pressure towards a swift approval of this Declaration.

We call on the world’s governments to seriously commit to this process. We especially call on the German and European governments to live up to their commitment to human rights by strongly engaging with this historic process. Violations of the rights of peasants and other people working in rural areas also take place here in Europe, where the Common Agriculture Policy is supporting the logic of “increase in size or disappear”. This production and export-oriented European industrial agriculture and food system leads to depeasantization in Europe and has enormous external impacts on the entire planet.

We acknowledge that although we come from countless different backgrounds, we suffer intersecting forms of oppression and must stay in solidarity with each other – South and North, women and men, elders and youth, rural and urban, peasants, migrant and seasonal workers, indigenous people, fishers, pastoralists and beekeepers. We affirm our interconnected struggles. If one of us loses, we all will lose. Our capacity to organize is our instrument of power and will lead to effectively enforcing our rights as human beings and as peasants.

Like a river, our forces will flow together in a mighty stream of life!