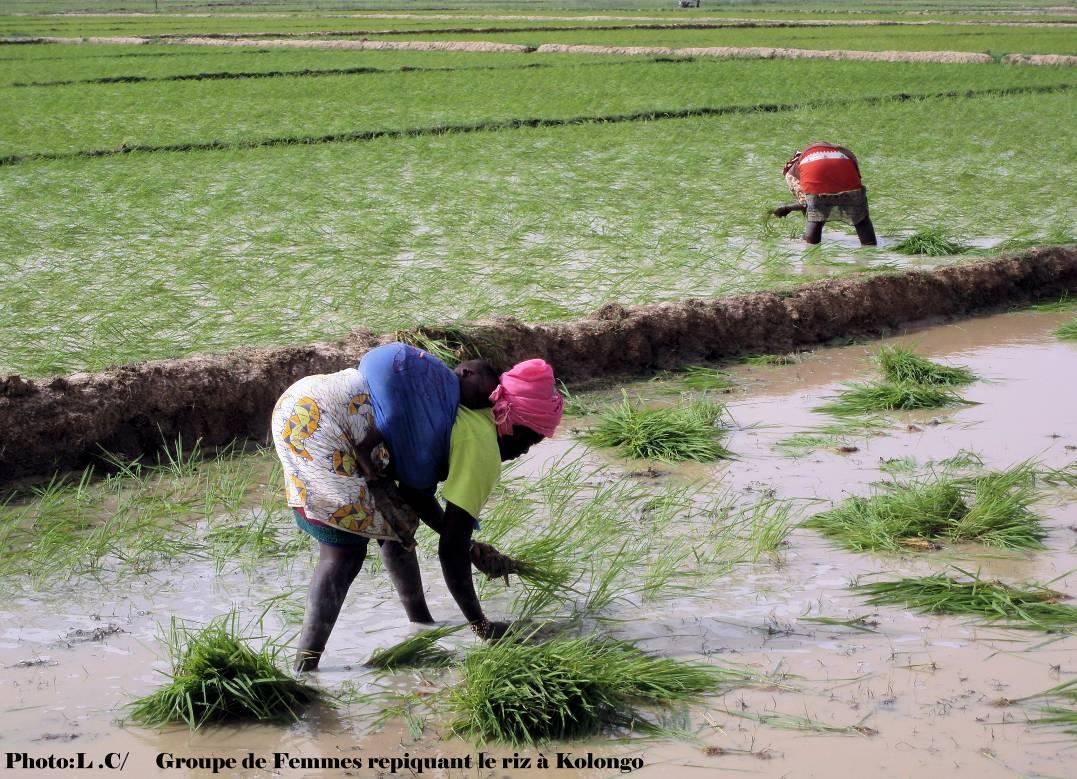 Land grabbing of small farmers’ land by large national and foreign companies is becoming an increasingly concerning issue in Mali. After investing in various sectors of the economy in Mali and in Africa, these national or multinational corporations are looking for new avenues of opportunity, namely land.  For example, MALIBYA, a Libyan company, has been allocated 100,000 hectares of land in the Office du Niger region, the country’s main rice-growing region and precisely in West Macina, in the Ségou region, the fourth region of Mali. It has been awarded this land by the Malian government as part of its promotion of private investment in rice production.

According to the convention signed by both countries, this strategic project’s main objectives are to guarantee the countries’ food self-sufficiency, to develop agricultural industry and to develop livestock farming.

According to MALIBYA’s managing director, Abdalilah Youssef, ‘the first stage of the project (financed by MALIBYA) includes firstly constructing a 40km-long water supply canal stretching from the Kolongotomo region to the project site in the Boky-Wèrè region. The minimum capacity of the canal is 130m3. This allows us to supply more than 11 million m3 a day and more than 4 billion m3 a year. The other element is the road, also 40km long. The contract cost is estimated at FCFA 25 billion. It will be carried out over the space of 12 months.’ The Chinese company CGC has been commissioned by MALIBYA to carry out the work on the canal and the road alongside it.

‘It will be the biggest canal in Mali and one of the biggest in Africa. We have begun to implement the project, which will be carried out in stages, the first of which covers 25,000 hectares of agricultural land and for which we started work more than a year ago. The project will be multifunctional and will encompass farming (in particular rice production with around 200,000 tonnes produced a year), livestock farming and industry. Therefore, in addition to crops, we will also see animal production (with predicted production at 25,000 tonnes of meat a year) and processing factories for agricultural produce (such as for tomato purée and laboratories),’ the managing director of MALIBYA explained to the private newspaper L’Aube in its 10 November 2008 edition.

Indeed, the Macina Cercle is a farming region and in terms of area the largest rice-producing region in the Office du Niger. It is not just an animal farming region par excellence but also a transit and departure region for transhumant livestock.

Therefore, whilst Mali’s government declares its commitment to guaranteeing food self-sufficiency for the country, it continues to sign a worrying number of agreements with foreign investors. This allows the latter to control the country’s most important agricultural land.

It should be remembered that some years ago, on the fringes of a Community of Sahel-Saharan States (CEN-SAD) summit in Bamako, the president of Mali, Amadou Toumani Touré, offered 100,000 hectares in the Office du Niger region to CEN-SAD. There is every reason to believe that CEN-SAD is run by Libya!

Libya, with increased dependence upon multinationals for the supply of agricultural produce, imported 177,000 tonnes of rice valued at $62 million in 2005 according to figures from the FAO. We can see that Libya, following the example of other Arab countries, is trying to overcome this food dependence by implementing projects such as the one in Mali.

Whatever the final destination of the rice may be, its production won’t help farmers in Mali that much because it will mean that certain local farmers will see their land seized and it will have to compete directly with other producers for water supply from the Niger River, the most important irrigation resource in the region. The company has even entered into negotiation with the government in order to get priority for water allocation out of season, when water levels are low. According to the information at our disposal, MALIBYA intends to farm the 100,000 hectares of land itself, hiring locals as farm workers.

In addition, there is concern about the way in which this project will destroy the great diversity of local rice seed and instead favour a small number of enhanced seed varieties and modern agricultural techniques, as is outlined in the convention.

‘We have signed a contract with a Chinese company for hybrid rice production. Today, Mali’s rice yield is 2 tonnes per hectare. By introducing this new variety of hybrid rice, yield will be improved and will increase from 2 tonnes to 8 or 9 tonnes per hectare. It is mainly the powerful countries who produce this hybrid rice and have the monopoly. It does not yet exist here. It will be a first in Mali, in Africa even,’ underlined MALIBYA’s managing director.

According to specialists, this variety of rice has limited taste, which is an important consideration for small producers who sell to local markets.

Furthermore, farmers are unable to preserve and reproduce the seeds of this variety and must repurchase each year.

In addition, local farmer’s organizations fear that the Libyan company will introduce genetically-modified (GM) rice to Mali through this project.

The Coordination Nationale des Organisations Paysannes (CNOP), an umbrella organisation representing farmers politically and defending their interests, was quick to take on the case after farmer’s organisations at the heart of the matter called on it to do so. It dispatched a mission with representatives of the Support Programme for Territorial Collectivities in order to give an account of the extent of development work on the land and repercussions for the local population.

If that wasn’t enough, this visit also allowed us to ascertain that another 100,000 hectare area in the municipality of Monipébougou, also in the Macina Cercle, belonged to the TOMOTA group. This private player in Mali’s economy grows jatropha on the land for use as a biofuel.

The farmers in the municipality, who have no wealth other than their land, have also been expelled to serve private interests. According to deputy mayor Mamadou Coulibaly, ‘this land was granted without the involvement of those actors affected at the heart of the problem and no convention was signed between the group and the town. What’s more, ploughing work has reached the road, which is a large national road, without taking into account the markers placed in order to identify animal trails. This puts into question the results collected by collectivities in their research into solutions to bloody or even mortal conflicts between livestock breeders and farmers. We wrote to the Prefect, the Governor, to the Ministry of the Environment and even to the TOMOTA group so that everybody’s rights are respected, including the famers expelled from their land and the council which wants to see the animal trails respected in order to avoid conflicts,’ Mr Coulibaly explains on the group’s site.

These same farmers, having not been compensated, have to work for the TOMOTA group for an average of FCFA 500-700 a day to provide for their families. 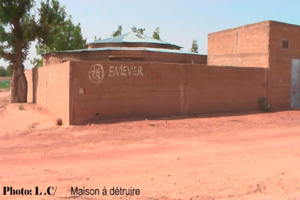 House to be demolished

By ‘putting the cart before the horse’, the population affected by the MALIBYA project can only wait for conclusions to be made regarding their compensation. Such as Antoinette Dembélé, a sixy-year-old who for decades has devoted her life to market gardening. She used to farm the plot of land that her husband left her before he died in order to pay her family’s bills and other social expenses. As part of the development work, she was dispossessed of her plot of land located next to the water supply canal.

‘The Chinese came and destroyed my garden and everything in it: guava trees, orange trees, papaya trees, onions and so on. And up until now I haven’t received any compensation for this. We tried to refer the matter to the local authorities: the council, the Office du Niger… these made it clear that they could not do anything against a governmental decision and that they had no other choice but to leave it. I’ve been forced to stay at home and sell small things like cigarettes and condiments to meet the needs of my family. It is very hard to keep fighting in this way as they have told us that the land belongs to the government and only the trees and plants that we planted or cultivated are ours. If we try to ask the Chinese who are carrying out the work about this, they tell us to go and see the President of the Republic and that they don’t have to account to anyone. There’s nothing left to do but hope that we’ll be compensated.’

A committee has been set up by the village to list all the problems in order to present this to the council and inform villagers of decisions taken. However, many inhabitants do not realize it exists, which undermines its legitimacy and its role defending the local population. Others state that this committee is being manipulated by defenders of the project. 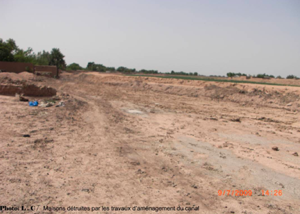 Importantly, everything leads us to believe that this project will only be advantageous to Libya. This is contrary to the hopes of inhabitants, who hope to benefit from the development of the 100,000 hectares. This is due to a lack of clear information on both sides. Information is biased at all levels and varies according to the interests of the concerned parties e.g. the Macina prefecture, the Office du Niger or inhabitants. This causes local authorities to believe in this project. Such as Macina Prefect M. Cissé: ‘after reports and meetings with representatives of the two investors, which hadn’t taken place before work began, I believe that this is a very promising project that will allow a large area to be developed thus helping the Cercle’s development. I haven’t seen any malicious intent from either MALIBYA or TOMOTA, just a problem of approach perhaps.’

The director of Office du Niger in the Kolongo region, who had put up resistance to the project as he had not been involved in the process of signing the convention, has since made a U-turn and is defending the project. He believes that the development of the main 17km-long supply canal will also be able to serve the Office du Niger for the development of other plots of land.

All these wishes expressed by different actors indicate the lack of awareness regarding the contents of the convention. The convention signed by the two countries remains almost invisible. The authorities concerned, the general population and, most of all, local farmers know nothing of its content or its very essence. This perhaps explains a certain amount of hope that people will benefit as a consequence of this investment. Yet there is absolutely no guarantee within the convention that the population will gain from it.

Having become a particularly complex and sensitive subject, the issue of land gives rise to grave concern surrounding the future of small producers.

As a consequence, numerous state structures (The Support Programme for Territorial Collectivities, the National Directorate for the Production of Animal Resources) and private structures from civil society (Coordination Nationale des Organisations Paysannes (CNOP) and the Mali Livestock and Meat Federation (Fédération de Bétails et Viandes du Mali)) have formed a national commission in order to defend the interests of the affected population who live off agriculture, livestock farming and fishing.

The CNOP intends not only to reinforce the struggle together with civil society organisations, but also to liaise with members of parliament to ask National Assembly ministers for agriculture and the environment to shed light on the case and guarantee rights to all actors.

Although a renewable 50-year lease is mentioned in the convention, a number of observers also fear a permanent land grab by Libya here through the granting of a title deed. This would create unprecedented dangers such as rebellions and the destruction of the rice-producing area seed system through the introduction of enhanced seeds, or even perhaps GMOs.