To the Government of Mexico

To the news media in Mexico and the World 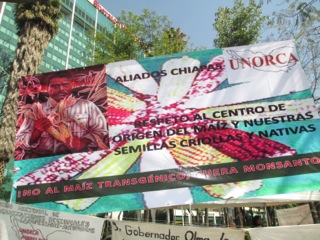 As the global coordinator of La Via Campesina, the world farmers and peasants movement, I write to give my total support to my fellow peasant leaders of the UNORCA in Mexico, who are protesting to stop the imminent approval by the Mexican government of large-scale commercial GMO maize plantations. Since, Wednesdat 23rd, they are sitting-in and carrying out a hunger strike at the Angel Monument in Mexico City, which commemorates Mexican independence from Spain. They are now struggling against a new form of colonialism.

With our presence in more than 70 countries around the world, in La Via Campesina we have seen the truth behind the lies of Monsanto and other transnational corporations when they promote the supposed benefits of GMO seeds. We have seen how the failures of these seeds have led to mass farmer suicides in India and to entire communities in the Philippines and in Paraguay falling sick, among other disasters. Now they want to contaminate the center of origin of one of the most important food crops for all of humanity. We cannot in good faith allow this to happen, as it could put the food sovereignty of all of humanity at risk.

I call on the Government of Mexico to reject commercial GMO maize planting, to cancel the permits already granted for open-field experimental and pilot plots, and to repeal the neoliberal seed and biosafety laws that have opened to door to GMOs in Mexico.

I stand together with my brothers and sisters of the UNORCA in their defense of humanity and the Mother Earth.