Breaking the silence: NO to violence against women 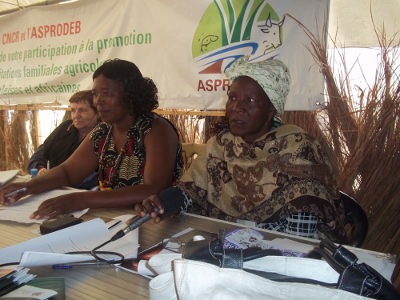 At the 2011 World Social Forum held in Dakar, we, the African peasant organisations members of la Vía Campesina, have decided to launch and communicate on behalf of our continent the campaign of our movement condemning violence against women, a campaign which was officially launched on an international scale at our fifth international conference in Maputo, in 2008.
In all societies, to varying extents, women and girls are victims of economic discrimination and physical, sexual and psychological violence, in both public and private spheres. Domestic violence, human trafficking, sexual harassment, genital mutilation, women being deprived of food, forced or early marriage, “honour” killings, femicide and rape as war weapons are all part of this horrific scenario. Furthermore, on the world scale, 70% of people who live in extreme poverty are women.

p { margin-bottom: 0.21cWomen farmers are subjected to acute social and economic exclusion and oppression. That is why La Via Campesina has decided, as a farmer’s movement, to mobilise against this injustice. We cannot remain silent! By averting our gaze and saying nothing we show our complicity in this violence. By mobilising against it we help to eradicate it and to build a society based on equality and justice.

To this end we undertake, as member organisations of La Vía Campesina, to carry out, during the coming years, activities on a national and regional scale, including:

● Starting or taking part in national campaigns in order to pass legislation guaranteeing women’s rights and denying impunity to those who commit violence against women and children.

● Organising public actions condemning violence and its causes, in order to prevent violence before it occurs.

● Reinforcing alliances and partnerships with national, regional and international organisations which fight violence against women and for the defence and respect of women’s rights, particularly the World Women’s March.

● Fight for parity in our organisations, guarantee women’s participation in decision making and their visibility in public events, and encourage the creation of specific women’s areas.

Violence against women, whether it occurs in the workplace, within our organisations, in the home or in the community is also the business of farmers’ organisations.

To end it we must understand the causes, break the silence and organise ourselves in order to fight it collectively, men and women together, by striving to create a new society based on equal rights for both sexes.
The right to live and grow up in safety, peace and dignity, as well as the right to work and education are fundamental human rights. If they are threatened or flouted it is our duty to condemn it and to break the silence.