Home » “Land occupation is not about slogans but about demonstrating that occupied lands can be used productively”, says Edwin Mohlahlo of LPM 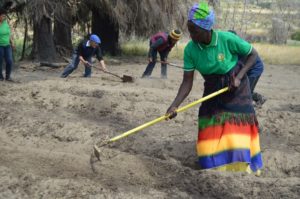 In October 2016, a group of landless people occupied a farm in South Africa belonging to the country’s Agricultural Research Council (ARC). With the help and solidarity of sisters and brothers from La Via Campesina Southern and Eastern Africa (LVC SEAf) member organisations, and other local organisations such as the Surplus People Project (SPP), the land occupiers cleared the land and planted their first crop – using agroecological production methods.

The land occupiers are part of the two local associations: Citrusdal Farmworkers Association and the Farm Dwellers Association. Most of the leaders of the associations work on the surrounding white commercial farms.

The occupation was deliberately done on 16 October, the day that La Via Campesina observes as the International Day of Action for People’s Food Sovereignty and against transnational corporations (TNCs). On this day La Via Campesina issued a call to action for true solutions to climate change, for Food Sovereignty, and for an end to the corporate control of our food and our lives.

This farm known as ‘Proefplaas’ – an experimental state farm – located in Citrusdal, Western Cape, South Africa, had been laying unutilised for over 20 years. The ARC used to rent out the land to white commercial farmers, most of whom took with them the agricultural machinery and irrigation equipment, some vandalised when they left. According to Petro Brink, the chairperson of the local Citrusdal Farmworkers Association, the farm houses were the only infrastructure left intact and are being rented by other people for accommodation.

Land reform slow and poverty on the rise

The South African government land reform programme has failed to redress colonial land injustices. Only about 9% of the land was redistributed in 23 years since 1994 – against a 30% target in 10 years following the end of apartheid rule. Many land-hungry people are frustrated by this slow pace. Some are calling for radical land reform like that of Zimbabwe which redistributed over 90% of commercial large-scale farms, most of which were in the hands of a few white farmers. “This land reform model (referring the Willing Seller Willing Buyer –WSWB- market model) is not progressive. We would like to have a militant and radical reform similar to that of Zimbabwe which Robert Mugabe supported”, said Petro.

In August this year, statistics in relation to poverty in South Africa painted a gloomy reality. They showed that poverty is on the rise, with over 30 million South Africans languishing in poverty. Unemployment too is on the upward trend!

Productivity affected by water shortages and lack of government support 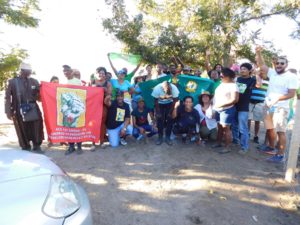 In April this year, about 25 LVC SEAf delegates from nine countries attending the Regional Peasants’ Rights Consultation visited the occupied ARC farm. During this visit, the occupying farm dwellers and farmworkers had planted a variety of crops including potatoes, sugar beans, maize, beet root, etc using their own resources. The farmers received training on agroecological farming from SPP.

Water shortages due to the current drought and lack of government support (i.e. credit etc.) were highlighted as the main factors affecting crop production. Water for irrigation is drawn from a nearby river using a small petrol water pump. Last season, the pump broke down and one of the farmers lost most of his watermelon crop. The water too was not enough to sustain all the farmers. Big commercial farmers have been building large reservoirs to capture water for irrigation. “The river was completely dry since November 2016. As a child, l used to fish in this river. But all this has changed as a result of global warming. The commercial farmers are surviving because they built big dams along the river. The farm occupiers don’t have the equipment and the money to do the same”, said Petro pointing at the few crops on about a half-a-hectare of land. Only three farmers were producing a variety of crops for sale and own consumption. Of these, one farmer had enough resources to sustain his farming activities and had the biggest land under production. 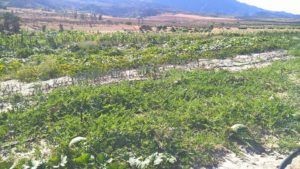 Farmers have repeatedly attempted to contact ARC to secure their tenure and also to address electricity cuts, but they are yet to get any response. Petro thinks that the lack of response from ARC shows that it is not taking the issue seriously and does not care about the farm.

The associations are considering several options on how to move forward on this issue to get secure access to the land to farm productively. “This is the second phase which the association is currently being discussed with its partners”, said Petro. The farmers have links with people who can provide them with legal advice in the event of an eviction.

The occupation of the Proefplaas is providing lessons to help to plan better future farm occupations. According to Edwin Mohlahlo of LPM, occupying the farm was a learning process. “We came here because we wanted to test if the land occupation programme can work. Now we have seen that it works, but much more needs to be done after the land is occupied to make it successful”, said Edwin to the visiting LVC SEAf delegates.

It is a lesson for LPM and its allies that resources are key to making the occupied land productive. “Land occupation is not about slogans but about demonstrating that occupied lands can be used productively. If we cannot farm the small pieces of land we occupy now, it means that we will not be able to utilise the big farms we intend to occupy. This farm provides a lot of lessons on how we should organise and prepare ourselves if we are to be successful”, he added.

According to a UNAC representative, the issue of land is a big challenge for all our communities. “The fact that we were part of this victory to occupy this farm makes us proud and honoured. Next time, we would like to see the farm parcelled properly to each peasant farmer and an increase in production”, she said .She also advised the occupiers to measure the exact size of the farm, warning them about potential counter occupations and other foreseeable forms of intrusion.