Home » Land Conflicts and the Criminalisation of Peasant Movements in Paraguay 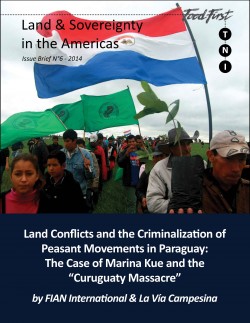 Title: Land Conflicts and the Criminalization of Peasant Movements in Paraguay: The Case of Marina Kue and the “Curuguaty Massacre”

Summary: This report is based on the findings of an international fact-finding investigation carried out in September 2012. It shows evidence of widespread human rights violations, legal irregularities and a state-sponsored campaign to criminalize peasant movements struggling to access land on which to grow food. The report is part of the Land and Sovereignty in the Americas publications series of Food First/Institute for Food and Development Policy.