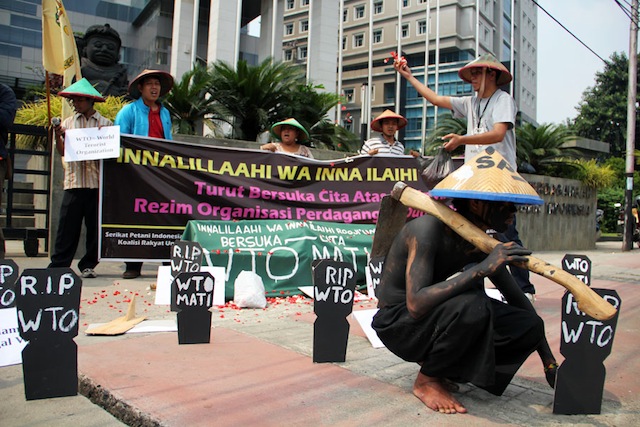 The Indonesian Peasant Union SPI launched a series of actions to oppose the World Economic Forum (WEF) East Asia from June 12 to 13, 2011.

The forum, held in the capital, is for transnational corporations to bolster investments and pour capitals into countries in the region. This has sparked protests from people’s organizations in Indonesia, because corporate economy is clearly against the mandate of the constitution.

And as always, free trade also includes in the agenda of the Forum. Pascal Lamy, the World Trade Organization (WTO) Director-General, is attending the event, supposedly to speak about bringing the dead Doha Round back from its grave. There are also talks involving 14 transnational companies  “to help Indonesia to raise competitiveness in food and agriculture”.

The willingness from the Government of Indonesia (GOI) to host the forum signals the alignments to corporations and its pro-market policies—and not to its people.

SPI with other movements organized an action in front of the Ministry of Commerce, saying that the old stratagem to build the country with corporations failed— it is proved to be one causes of the global financial meltdown in 2008. Moreover, reviving the WTO from the dead is also an old strategy because it has failed in the last decade to really bring development to the poor, especially farmers.

The people in the actions symbolically buried the WTO and reiterated the need to global trade justice, and for the GOI to implement policies that will develop the economy of its people.*****