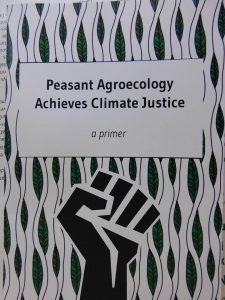 African smallholder farmers constitute over 80% of all farms, producing over 70% of the food consumed on the continent, relying on farmer saved traditional seeds and traditional farming practises informed by century old indigenous knowledge systems. However, their way of farming faces a new threat: climate change which has led to changes in seasons (droughts, high temperatures, floods, etc) and crop patterns, melting of glaciers and rising sea levels. Southern and eastern Africa has experienced unprecedented floods, droughts and high temperatures leaving many people vulnerable and food insecure. In East Africa resident to large numbers of pastoralist communities, disputes involving pastoralists over access to water holes and grazing have increased dramatically as available resources diminish.

With the increasing prevalence of ecological disasters related to climate change, and growing water scarcity, La Via Campesina Southern and Eastern Africa (LVC SEAf) working together with Afrika Kontakt initiated a project to strengthen advocacy strategies and capacities for climate justice. Starting in March 2017, an 18-month long research (including farmer to farmer exchanges to Democratic Republic of Congo and Kenya) was done to document small scale farmers’ regional struggles against climate change and understand policy frameworks in four African countries (Mozambique, Tanzania, Uganda and Zimbabwe). In addition to the studies, and internal strengthening exploring the link between peasant agroecology and climate justice, a primer showing the impacts that the small scale farmers and peasants around the world are facing from climate change and the solutions they are using to address climate change was prepared.

According to the studies, these countries have formulated policies across key sectors to address climate change, but such policies are largely inadequate, disconnected and at times contradictory. For example, the governments seem to have embraced Climate Smart Agriculture (CSA) based “green revolution package”- a main source of greenhouse gas emissions – as a solution to climate change. In the case of Zimbabwe, the government is supporting the use of synthetic fertilizers and hybrid seeds, especially maize. In Mozambique land grabbing and privatization of land for export crop production using green revolution techniques has dispossessed thousands of peasants, leaving them, particularly the women and youth, more vulnerable to climate change. Youth migration to cities has increased as they can no longer sustain themselves.

However, not all smallholder farmers are accepting the governments’ solution to climate change. In Uganda, Zimbabwe, Mozambique and Tanzania, the farmers are experimenting and sharing knowledge on a lot of local innovations working towards achieving food sovereignty. They are building their farming system reliance through exchanging seeds diversifying their crops, innovating new ways of water conservation (such the water infiltration pits dug along fields by ZIMSOFF farmers), organizing learning visits (in Tanzania and Uganda farmers are identifying champion agroecology farmers to share their experiences with other farmers using community radios, learning visits, etc). All this shows that farmers are not passive but actively seeking ways to mitigate and adapt to climate change. Instead of seeking external solutions, their governments should work with and consult farmers to build lasting and relevant policies and solutions to climate change.