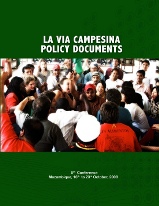 Content:This publication is a broad compilation of background and policy documents which have been widely discussed within our movement and which were produced by members of Via Campesina and its leaders from around the world. The texts published in this book were either written collectively for a specific event over the past years or specifically drafted by some Via Campesina representatives. They were then published in two booklets. The first one, published in March 2008 was discussed during the regional meetings in the lead up to the 5th Conference of Via Campesina that took place in Maputo, Mozambique, from the 16th to the 23rd of October 2008. A second booklet was published just before the conference. All those documents were finally discussed at the Conference itself during various assemblies and  workshops.