(New York, May 10, 2010) – On May 6 and 7, La Via Campesina participated in a delegation of civil society groups convened by the government of Bolivia to accompany President Evo Morales to present the People’s Accord of Cochabamba to the United Nations Secretary General Ban Ki-moon, the G77 and China. The event was an historic opportunity for members of civil society to gain political space in the UN dialogue on climate change ahead of the next round of official negotiations under the UN Framework Convention on Climate Change (UNFCCC) in Cancun, Mexico in December. 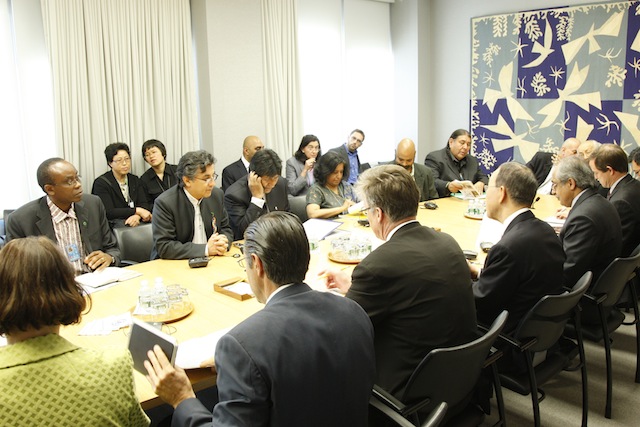 “As a delegate for La Via Campesina, I can say to my colleagues in Brazil in the social movements that, thanks to the intuition and action of Evo Morales, a new path was opened to raise the demands of the social movements to the UN through the General Secretary, and possibly in Cancun at the next official international climate talks,” said Father Tomás Balduíno of the Pastoral Land Commission in Brazil, one of two Via Campesina representatives in the eleven-person delegation.

The Cochabamba People’s Accord is the product of the collaborative efforts of over 35,000 participants at the World People’s Conference on Climate Change and the Rights of Mother Earth, held from April 20th to 22nd in Bolivia. La Via Campesina sent 300 international delegates and 3000 Bolivian delegates to the Conference, which was called for by President Morales after the UNFCCC talks in Copenhagen last December.

The Cochabamba People’s Accord is an alternative to the Copenhagen Accord, which, some say as a result of political pressure by the U.S., has now been signed by 120 of 192 UN countries. According to Pablo Solón, Bolivia’s Ambassador to the United Nations, the Accord seeks to undermine the Kyoto Protocol, has no differential treatment between rich and poor countries, and calls for reduced assistance to help poor countries combat the effects of climate change, with no specification as to the source of the funding. Additionally, the Copenhagen Accord would make commitments to reduce greenhouse gas emissions voluntary and no longer consensual.

Another major point of contention is that the Copenhagen Accord does not address how emissions from industrial agriculture, which causes about one-third of global emissions, will be reduced. According to Ambassador Solón, “Agriculture is not being discussed in the UNFCCC negotiations as it should be, while at the People’s Conference it was discussed a lot, as a large part of greenhouse gas emissions is from agriculture. Agricultural development should not be based on the development of business and profits, but rather on sustainable, peasant agriculture that is in harmony with nature. Food sovereignty needs to be put on the table.”

In fact, present and future UNFCCC legislation for agriculture will likely facilitate the expansion of industrial agriculture, thereby increasing the vertical integration and market consolidation of agribusiness, especially the U.S. biotechnology and chemical corporations Monsanto, DuPont, and Arborgen.

For example, the UNFCCC Secretariat is presently considering whether plantation monocultures of genetically-modified (GM) eucalyptus and pine trees will count as ‘forests’ for carbon sequestration and emissions offsets under the program for Reducing Emissions from Deforestation and Degradation (REDD). Monsanto is lobbying to have plantation monocultures of GM Roundup Ready soybeans be eligible for carbon credits through so-called “no-till agriculture,” which will increase the use of the herbicide glyphosate, sold by Monsanto as Roundup, which is in a class of highly-toxic chemicals called endocrine disruptors.

In his briefing to the G77 and China, President Morales said: “There are two ways forward: Either save capitalism, or save Mother Earth. If Cancun is the same as Copenhagen, then unfortunately the UN will lose its authority among the people in the world.”

At a press conference Friday afternoon, Morales was questioned about the decision by the Obama administration to deny climate aid to countries that refused to sign the Copenhagen Accord. Just last month, the U.S. State Department canceled $3 million in climate aid to Bolivia and $2.5 million to Ecuador. The funds were to come from the Millennium Challenge Corporation, a public-private corporation created by the Bush administration. Morales referred to the decision by the U.S. as ‘blackmail.’

According to Yoon Guem Soon, a South Korean farmer and member of International Coordinating Committee of La Via Campesina, “The Bolivian government and President Evo Morales showed the social movements what is the next step after Cochabamba. Through Cochabamba and at this meeting in New York, I am pretty sure we can have a victory in Cancun. In the meantime, Via Campesina has a lot to do.”