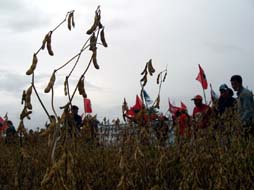 On Tuesday morning (March 14), around 1000 small farmers and peasants from La Via Campesina movement occupied a field in Santa Teresa do Oeste (PR) – Brazil where the transnational seed corporation Syngenta Seeds is growing experimental seeds. The peasants denounced the illegal activity of experimenting with transgenic seeds in the area, an activity that has already been confirmed by the National Institute for the Environment and for Renewable Natural Resources (IBAMA), located in the “absorbing” zone of Iguaçu National Park.

According to Article 11 of Law 10.814/2003 (which establishes rules for the planting and trade of genetically modified soy in the harvest of 2004), the practice constitutes an environmental crime, because “the planting of transgenic soy seeds is forbidden in the area of conservation and in the respective  absorbing zones”.

On March 8, IBAMA carried out an inspection in the corporation’s experimental field and verified the illegal existence of around 12 hectares of genetically modified soy planted in the area near the park. The action was informed by an earlier accusation that had been presented by peasants and by the Terra de Direitos group to the environmental agency.

La Via Campesina denounces the criminal conduct of the Syngenta corporation and the threat of damages to the area of environmental preservation. The park where the Iguaçu Falls is located was declared a Patrimony of Humanity by the UN Agency for Education, Science, and Culture (UNESCO).

With respect to the serious environmental crime committed by Syngenta, La Via Campesina and its fraternal groups demand:
1.    The immediate interdiction, embargo and  prohibition of  Syngenta’s activities in the area.
2.    Criminal, civil, and administrative charges against the corporation and its directors, with the application of all suitable fines.
3.    Criminal, civil, and administrative charges against the members of the National Technical Commission on Biosecurity that authorized these experiments in an outlawed area;
4.    Rigorous inspection by IBAMA in all the “absorbing” zones of Iguaçu National Park..

Environmental Crimes
The Syngenta corporation is responsible for the largest case of genetic contamination in the world. The corporation criminally sold Bt10 corn as Bt11, without authorization for four years in the United States. The transgenic corn of Syngenta was not evaluated by the regulating agencies nor were its effects on human health or on the environment. The seeds that were sold contaminated the corn exported to various countries.

The Monsanto corporation also was charged by IBAMA in at least two experimental fields in Brazil; one located in Rolândia, the other in  Ponta Grossa. In these two cases alone, Monsanto paid environmental fines of $R 2 million.

While the large transnational corporations privatize seeds and destroy the environment, it is up to the peasants and small farmers to denounce the crimes and to struggle in defense of biodiversity, especially for the protection of native seeds. In this struggle, the strategy of the corporations has been to invert logic and to criminalize the peasants and small farmers who organize and oppose the powerful economic and political interests of these corporations. An example of this: about a week ago, Monsanto asked for preventative jailing of a landless worker, in relation to the occupation of an experimental area with a series of illegal experiments in 2003 in Ponta Grossa.

Given this situation, La Via Campesina is publicly denouncing the criminalization of the social movements to cover up the illegal conduct of these transnationals that threaten biodiversity and the rights of future generations with incalculable damages.