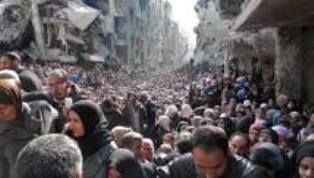 La Via Campesina has been watching recent reports of the invasion of the Palestinian refugee camp Yarmouk by extremist armed forces with great concern. It comes at a time when the camp is suffering from a two-year siege on it. We are extremely worried about the well being of our friends and partners in the food sovereignty projects on the ground, who have been targeted by  armed forces. The recent targeted execution of civil society activist Firas Al Naji—a founder of food sovereignty projects in Yarmouk (which aim to ease the suffering of a community living with severe malnutrition due to the siege), among other initiatives—is a dark example of the grave situation that civil society faces.  We are also deeply concerned for the safety of Abdullah Al Khateeb and other human rights rights defenders targeted by militant groups. The threat against all of these active members of civil society is massive, and we do not want to stand quietly aside while they and their community are targeted.

In the case of Yarmouk, which is a southern suburb of the Syrian capital, the UN body that is meant to maintain and provide relief services to the Palestinian community, UNWRA, has not been able to fulfill its basic obligations to the camp’s Palestinian residents. This has been the case for almost two years, ever since the enforced siege was imposed on the camp. Meanwhile the entire population of the area—not only Palestinians—is left isolated and without any relief from the international community.

This two-year siege prevents people from entering or leaving the camp, and prevents access to food and medical care. Since September 2014 a drought situation was created inside the camp by turning off the water supply. Thus the humanitarian situation has grown extremely dire for the camp’s remaining 18,000 inhabitants. This siege is completely illegal according to international humanitarian law and has to be considered a war crime.

As a peasants’ movement and a movement for food sovereignty rights, we are deeply concerned about this continued violation of the rights of Syrians, all of them, facing the criminal strategy of “starve or surrender” in many areas around Syria. With almost 200 deaths caused by starvation, Yarmouk is one of the most strikingly outrageous examples of this method to try to break entire communities. We reject the use of hunger and food as a weapon against people, by any armed forces.

In light of the new developments inside Yarmouk, with the invasion of the “Islamic State” and its attacks against Yarmouk’s residents making the humanitarian situation even more dire, we call on the international community and especially the UNWRA to do everything they can to protect the people in Yarmouk.

We urgently call for:

Organize protests in your cities for solidarity with the people in Yarmouk and to demand that the international community, UNWRA and the International Committee of the Red Cross use their mandate and do anything they can to protect the people in the Yarmouk camp.