Home » La Via Campesina at the People’s Summit 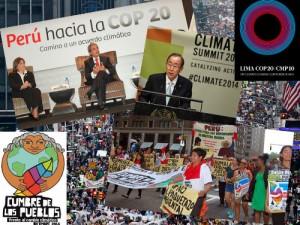 The People’s Summit on Climate Change began yesterday after a week of sessions at the United Nations Framework Convention on Climate Change (COP20) that has turned this city into the current global capital of the climate crisis caused by an increase in industrial emissions of greenhouse gasses (GHG).

COP20 is intergovernmental while the alternative summit joins together representatives from the community, social movements and civil society organizations concerned about the lack of understanding between governments on putting a halt to GHG emissions.

The People’s Summit has been taking place alongside COP since 2009 when the intergovernmental negotiations failed to come up with an agreement to replace the Kyoto Protocol.

Organizations of women, farmers, indigenous peoples and activists from every continent are all taking part in this summit with intense participation of social movements from Southern Cone countries of the Americas.It began yesterday at 17.00 hrs with the participation of the mayors of Lima and Bogota as well as leaders of various farming, labor and youth movements.However, the expos, conferences, workshops and roundtables among other activities will begin in the morning at Exposition Park right in the historic center of Peru’s capital.

As part of summit activities, the People’s March is set for December 10th, the International Human Rights Day. On this day the UN commemorates the anniversary of the passage of the Universal Declaration on Human Rights completed in 1948.

This year the summit calls on the world to mobilize for the right of all living systems to thrive on the planet in spite of destructive capitalist activities.This global movement seeks to dismantle the influence of transnational corporations on climate negotiations.

The summit was preceded by gatherings such as Women for Climate Justice in Defense of Mother Earth held in Lima of June this year.

In acknowledgement of COP20 in which the governments of 190 nations with the goal of achieving a binding agreement to be signed next year in Paris, the members of the National Federation of Peasant, Artisan, Indigenous, Native and Salaried Women (FENMUCARINAP), the National Agriculture Confederation (CNA) and the Peruvian Farmers Confederation(CCP)recognized as protectors of biodiversity denounced the climate crisis as a consequence of the global patriarchal order and a production model based on predatory capitalist consumption.

They called for access to land, water and territory, an active role in political decision-making spaces at every level and recognition of their contributions in all areas of family, community and social activities.

The subject of women as hidden victims of the climate crisis is understood to be one of the fundamental issues at this summit.

The Via Campesina is a movement that includes millions of farming men and women from more than 70 countries on every continent. The group released a position paper a few days ago that declared that now is the time to radically change the model of industrial production, sale and consumption of both land and sea based food products.

This global organization of producers states that small-scale agriculture and local food consumption will reverse the current devastation and supply food for millions of families, which will spark a decrease in global temperatures resulting from carbon emissions to the atmosphere.

According to the Via Campesina, industrial agriculture is one of the primary causes of climate change resulting from transporting food all over the planet, mechanization and the use of petroleum-based agro-toxic chemicals and the increasing deforestation and monoculture planting that is destroying biodiversity and the capacity to absorb carbon emissions.

The Via Campesina has called for the complete dismantling of agribusinesses that are displacing smallholders from their lands and creating environmental disasters, replacing industrial agriculture with sustainable family farming, prohibiting transgenic seeds and agrofuels as they are not a solution, as well as a general reduction in energy consumption and promoting public policies for food sovereignty.