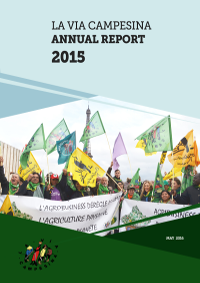 Summary: Peasant agriculture is faced with  a constant offensive by transnational companies that are grabbing land and resources, imposing a mode of production based on chemical inputs and industrial seeds, and making profit out of globalized and de-localised food production chains. Millions of small farmers, women and men are left landless, with no support from their governments, and forced to move away from  their communities to find a job in order to survive.

Those who resist are repressed, sometimes killed. In 2015, we denounced death threats, beatings or assassinations among farmers of La Via Campesina from Korea, Turkey, Poland,  Colombia, Palestine, Brazil, Guatemala, Argentina, India, Thailand and Honduras.

Despite this repression farmers’ organisations belonging to La Via Campesina have continued to oppose  agribusiness  and  aggressive neoliberal policies and governments that are supporting this unsustainable food system and economic model.