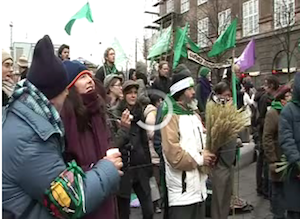 La Via Campesina Action in front of Danish Meat Council buiding, Copenhagen 13 December 09 to denounce this model of intensive industrial production- from the soya and its transportation to the export of the meat Interventions of Danish Farmer Ole Davidson from Frie Boender, Marie Smekens La Via Campesina Belgium, Dayana Mezzonato MST Brazil, Alberto Zoratti Fair Italy “These pigs are mainly fed by GMO soya grown industrially in deforested land in South America from which the true owners have been expelled. Huge amounts of fuel are used for the transportation of soya and pork exportation. the agricultural practice connected with the pig industry turns the soil of Denmark into carbon dioxine and dead dust.”