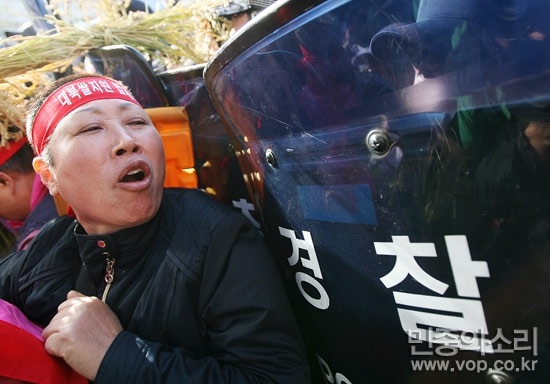 Women peasants in Korea are furious. On October 20, 2009, around 200 women peasants of the Korean Peasant Women Association (KWPA) gathered at Yeuido in front of parliament, demanding a guarantee for rice prices and a resumption and legalization of rice aid to North Korea.

Since last month, farmers have started plow over their rice fields prior to the fall harvest and have held demonstrations to pressure the government into taking measures to stop rice prices from dropping. Farmer protests are continuing to spread throughout the country. 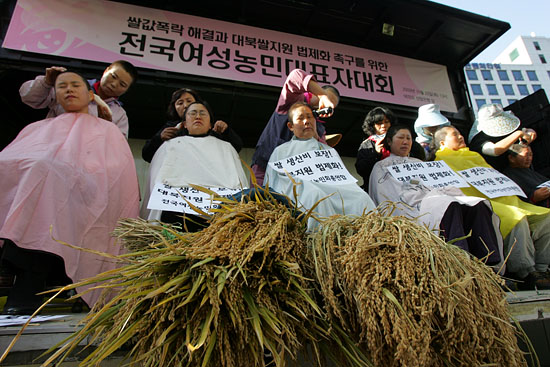 In fact, in rice producing areas nationwide, rice prices as of September 29 were 10 percent to 30 percent lower than what they were last year, and it is currently difficult simply to make production costs. KWPA insists that the drop in rice prices is due to stockpiles that have accumulated since the government’s termination of rice aid to North Korea. The government has suspended the yearly 400,000 tons of rice aid to North Korea for the last two years.

In a recent demonstration, 6 leaders, including chairperson of KWPA Kim Kyungsoon, shaved their heads in protest. KWPA members have also set up a tent and are living in the middle of the street in Yeuido, as they will continue to spread the voice of farmers to parlimentary members and the public until November 17, when a large national rally for farmer organizations will be held.