Thousands of peasants, peasant women and young people of Karnataka Rajya Raitha Sangha matthu Hasiru Sene (Karnataka State Farmers Association and Green Brigade) from various parts of Karnataka took out a huge procession in the main streets of Bangalore and later sieged the residence of the Chief Minister of Karnataka Mr.Kumaraswamy on Monday, the 24th September, 2007, with demands beginning from waiver of agricultural loans to banning GM crops in Karnataka. 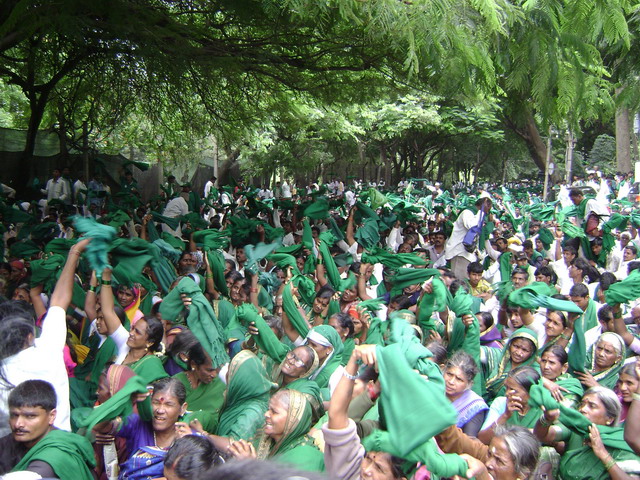 The angry peasant satyagrahis who came voluntarily to the capital, squatting the trains with their food to the action refused to disperse when they were asked to disperse by the police while they were occupying the street in front of the residence, until Chief Minister H.D.Kumaraswamy personally heard their grievance.

The twelve main demands which Raitha Sangha put before the Sate Government are as follows:
1. The State must write-off all the agricultural loans, as farmers in the rural areas have no paying capacity as agriculture is in big crisis due to neo-liberal policies
2. Free import policy of India should be abolished to protect the agri-market and price for all the farm produce should be fixed scientifically based on calculating the cost of production of each crop.
3. To implement a scientifically devised crop insurance policy and to insure all the animals used for agriculture.
4. Stop handing over of power sector to the private companies (national,multi-national) uniform electricity policy for rural and urban areas should be implemented, as the state is   transmitting 24 hours of electricity to the urban areas where as only 8 hours of erratic supply to the rural areas.
5. To withdraw all legal charges pending against the peasant sathyagrahis immediately
6. To stop the illegal acquisition of fertile agricultural lands to establish Special Economic Zones(SEZ) to build huge industries, Townships and resorts for elite section of the society.
7. 30% of the total state budget should be reserved for the small irrigation projects of the state and all the pending projects should be made real soon.
8. All the people and animals in the flood affected area and drought affected regions should be rehabilitated immediately.
9. The State should pressure the Central Government to withdraw the membership from the WTO
10. To immediately abolish corporatisation of seeds through amending the seed law of India which is popularly known as Seed Bill 2004.The law which will shift the control over the seeds and the traditional knowledge related seeds to the hands of the Multi-national seed companies who are primarily interested in taking over the enormous seed market of India and to make the farmers slaves for the seeds every time of sowing, as well as criminalizes the traditional practice of conservation and free exchange of seeds among the farmers. Commercialization of genetically modified seeds being one of the main goals of these companies who will not take accountability in any way for unimaginable and irreparable damages it will cause on all the living beings and the environment which cannot be rebuilt again. With this demand KRRS also urged that GMO’s should be completely banned from the state.
11. Amendment to Agriculture Produce Marketing Committee Act of 2003(APMC-003) is only to open the doors for gigantic foreign investors in the marketing sector and also to promote corporate farming should be re-amended to develop farmer oriented marketing system.
12. Imitating the western Super market culture is leading to close down of small shop keepers and small vegetable and fruit venders and also consumerism among the middle class of the society is being injected. So, all the super markets in the cities and major towns of Bangalore should be closed down as soon as possible.

The Chief Minister finally arrived to the place where farmers were waiting for him, and assured the protesters that he would convene a meeting of farmer leaders of KRRS and GB, concerned officials from different departments and the scientists who are working to promote Genetic Engineering in Agriculture before 3 rd of October 07, to find out a solution to solve these issues.

However, in spite of CM’s assurance the angry farmers conveyed that even if the government fails to fulfill all their demands, they would certainly implement all the demands themselves, as they believe in the direct democratic action and have declared themselves as the alternate government of the State.