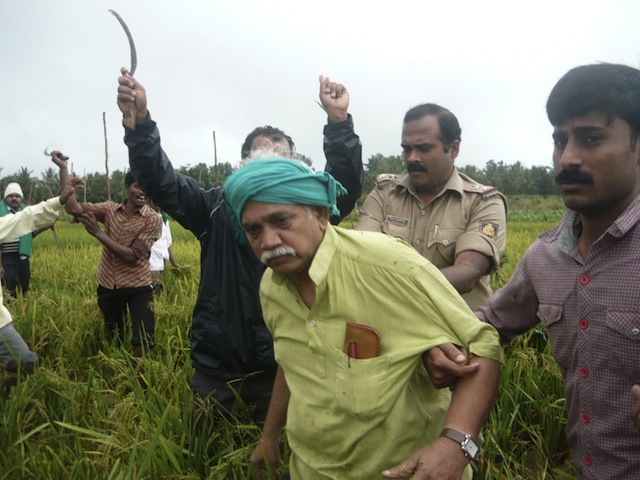 November 17, Dodballapur, Bangalore rural:- Farmers of Karnataka Rajya Raitha Sangha [KRRS] today sent out a strong warning to the Multinational seed corporations trying to take control over India’s seed sector by stopping the field trial of Dupont’s genetically modified [GM] rice here. The open air experimental trial was being conducted at the Krishi Vigyan Kendra, under GKVK by the Multinational Seed company. Hundreds of farmers from the area assembled at the KVK and staged a protest demonstration against such open air experiments of GM crops.

This field trials were recently permitted by the Genetic Engineering Approval Committee, the nodal agency for GM crop releases in India in its 103rd meeting held in New Delhi on 29th September 2010. Dupont, the second largest seed corporation in the world after Monsanto, is developing a GM rice using a transgenic SPT ( Seed Production technology), a proprietary technology.SPT technology that allows increase of large quantities of genetically male-sterile female inbred parent seed. This could then be used for commercial hybrid seed production.

Leading the protest, Dr Venkata Reddy, Vice president,KRRS declared that “the farmers union will oppose any such open releases of GM crops as they are a step towards submiting our agriculture into the hands of US multinational Seed companies who are out here to control our seed and there by our agriculture”. He further pointed out that “GM rice is a threat not just to the farmer but to every citizen in the country due to the health and environmental implications. There has been many scientific studies accross the world pointing to the same.”

Earlier in the year, Bt Brinjal,the first GM food crop to reach commercialisation stage was put under an indefenite moratorium by the Union Environment ministry, under who GEAC comes, owing to strong opposition from all sections of the society including farmers unions, scientists, consumer organisations and other civil society organisations. Post that, seed companies and their promoters in the government have been trying to push for open air experiments of a variety of GM crops including GM rice, at times violating basic minimum requirements.

KRRS spokesperson also highlighted the major violations in the particular GM rice field trial at the KVK and said that “there was no information given to the local panchayat on the conducting of it which is required by the existing rules”. He further said that “people in the region had been kept in the dark about such dangerous experiments happening in here. There was no information boards kept outside the field trial to warn the people about the experiment. There was also free access to the trial plot which in the absence of any warning could lead to the seeds going out of the trial region and thereby mixing up and contamianting other regular rice verities which farmers in the region cultivate”.

India is a centre of orgin and diversity of rice and ahs close to 75000 land races of rice. The western ghats region in Karnataka is one of the regions of the country which is rich in rice diversity. Contamination from GM rice is seen as a major threat to this. Kerala state government had banned any open releases,including experiments, of GM rice due to this reason.There is no biosafety data on GM rice that is available untill now.

Dr Reddy warned the public sector research institutions in Karnataka who are getting into such ventures which are deleterious to the farming community. He urged them to do research in favour of the farmer and not for the profit motivated seed companies.He also urged the state government to declare Karnataka as a GM Free state and demand the central government to stop such experiments in the state. He further reminded hat agriculture is a state subject and the state government needs to play an active role in ensuring that citizens of Karnataka are safeguarded from such dangerous experiments.