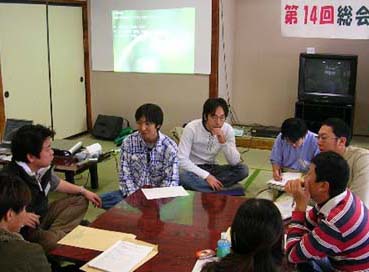 “Japan go backward from the stream of the world. In this country, the number of successors of agriculture is rapidly dropping, and many youth people go out from a local community to an urban area for getting a job. Despite the crisis situation for agriculture, the government forces farmers to leave their farming land,” said by Yoshio Sasawatari, the Secretary General of NOUMINREN in the speech for 14th Conference of NOUMINREN Youth Association. The conference was held from February 19th to 20th in Tokyo. 36 youth farmers and staffs of direct marketing have gathered from all over Japan and discussed with each other through all day and all night. In the first day, the marathon speech of the participants of Hong Kong action in last December took place. In the second day, they discussed how to move youth farmers who suffer from the government agricultural policy to join with their movement. They have reached a decision that increasing members of the association and struggling in the front line are significant for the entire movement.

In the marathon speech, more than 10 people who have joined to the Hong Kong action reported. “From the experience in Hong Kong, I have strongly felt that we should define the problems caused by WTO. We need to broaden our domestic struggle against WTO for contributing to the international movement,” said by Manabu Ishii, a secretary general of the Youth Association of Hokkaido. Many speakers emphasized impressive experience of sharing and exchanging information with peasants from many countries in Hong Kong and importance of strengthening international solidarity.

Chizuko Takahashi, a member of the Diet who went to Hong Kong came to the conference as a special guest. She reported about the discussion with some congressmen from South Korea in Hong Kong. The congressmen said, “The farmers from South Korea was not aggressive and violent like the local media propagandized.” Then, she explained that how the Japanese government ignored the farmer’s livelihood and agriculture. Also, she emphasized that strengthening international solidarity was significant for protecting people’s food sovereignty and promised to cooperate with various people’s movements.

The discussion in the second day has become more heated. The youths were divided into three small groups consisting of 9 to 10 people and discussed about how to strengthen the youth movement. They shared their experience and sometimes argued with each other. Many unique ideas came up like “Selling agricultural product in a local market is so exciting. Can we ask youth farmers for the selling? It can be effective for strengthening our movement.” Each group presented the matters that had been discussed. At the end, they have promised to keep on asking local youth farmers for cooperation.

At the end of the conference, they have reached a unanimous decision that broadening the circle of youth farmers is important for advancement of the entire movement. Chairperson of the association Takumi Kasai said, “First of all, it is important to be a friend of local youth farmers and ask them to join us. Then, we should bring youth voices and demands to the entire farmer’s movement domestically and internationally.” The power of the youths is the key for the future of agriculture.