“For Food Sovereignty, Let’s Struggle Together with Strong Solidarity!”

Last May 17-20, 2007, SHOKKENREN hosted an international forum to “Stop! WTO-FTA/EPA for Food Sovereignty” in Tokyo, Japan.  SHOKKENREN, is the National Coalition of Workers, Farmers and Consumers for Safe Food and Health in Japan, which is a network of organizations including NOUMINREN (Japan Family Farmers Movement), labor unions, women’s groups, consumer groups, etc. This coalition was founded in 1990 in order to protect people’s food, health and agriculture.

UNORKA-Pilipinas’s Evangeline Mendoza, along with Korean Women Peasants Association’s Ms. YI, Jeoung-Ok and NOUMINREN’s Mr. Junichi Shiraishi, were invited as speakers to the forum to discuss about two burning issues of today: a] effects of free trade policies including Korea-US FTA, and b] outcomes of Nyeleni 2007 and visions of struggle for food sovereignty. 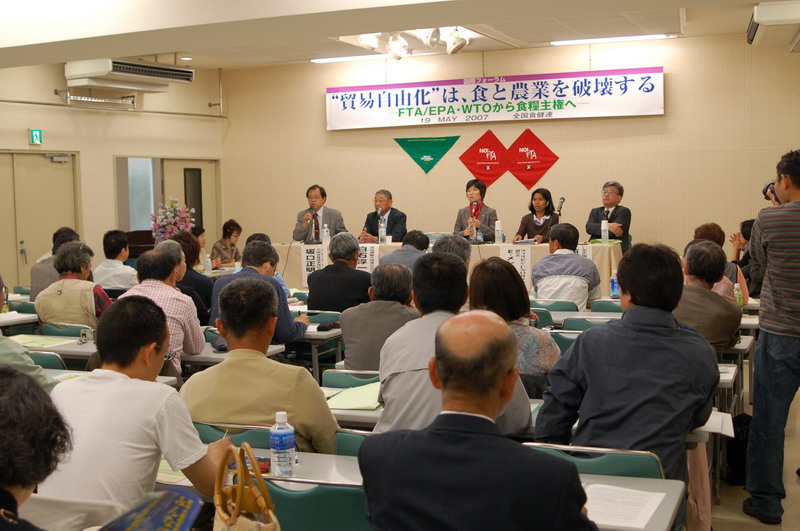 Before the conference, there was a debriefing made with the speakers. It was facilitated by Mr. Yoshitaka Mashima, Vice-Chairperson, NOUMINREN who shared about their agricultural system. Mashima was born in 1949, during the post-war era (1945-1950). Before the World War II, half of the land was in control of the farmers. Japan during that time is similar to the Philippines of the current times. Landowners in the Philippines are very influential. Before there was the same pattern with Japan. However, after the war, the Japanese elite became powerless. Landowners were not allowed to own the land if they didn’t live in the land. During that time, state intervention was powerful. The state bought the land from the landowners and distributed them equally to the landless.

However, in the 21st century the principles of land-to-the-tiller and land-belongs-to-the-natural-person were under threat. The Japanese government allowed FTA/EPA. It allowed the MNCs (multinational corporations) to control the land. These all tend to the abolition of agriculture, scrapping of the Land Reform Law and constitutional changes. Mr. Mashima shared good insights that might be useful as far as the Philippine context is concerned.

In the conference, Ms. Mendoza was the 3rd speaker. She discussed the a] reality of Philippine export-oriented agriculture, b] peasants struggle and human rights violations in agrarian setting, and c] report on “import” of Japanese industrial waste in exchange of “export” of Philippine nurses under Japan-Philippine EPA.

Right after her speech the audience appeared to be overwhelmed, especially from the sharing of the peasants struggle. Two interesting questions were asked to the speakers. The first one was about the banana production, and the second one about the Philippines-China Farm Agreement.

To the first question, she briefly explained that around 31,000 hectares of agricultural land were devoted to banana plantations (Region 11) which also deferred from CARP coverage. Several findings and media exposure indicate that Cavendish banana contains toxics and is dangerous to health. Thus, the alliances of banana workers who are immediate victims of hazardous chemicals filed a legal case at the Supreme Court against the company producing toxic chemicals several years ago. By then, several actions followed by different groups of banana workers belonging to UNORKA (PO), MFDC and PEACE Foundation (NGOs) who called for a boycott. One participant clarified, “why you are calling for a boycott?”. Boycott is aiming at having a direct impact on producers and consumers, so that they would take notice and get involved. Along with boycott is the expose on the hazardous effect of chemicals to the workers and nearby communities. Publicly and internationally, we always expose the fact that there is blood on the bananas that people eat.

Besides this, the boycott campaign also aims at calling for the coverage of the plantations under agrarian reform. Most importantly, the banana plantation workers are always at stake. Perhaps because many people already suffered and were killed by the landowner’s hired killers when they were identified as someone calling for land redistribution.

Second question was about the RP-China Farm Agreement. She explained that last January 2007, the Philippines signed 19 farm agreements with China during the state visit. The contracts aimed at developing joint RP-China marine/aquaculture projects and securing over 1.2 million hectares of Philippine lands to grow food, fruit, flower, vegetable and bio-fuel crops for China. The Chinese investors themselves providing the technology, direct management and marketing facilitation.

It appears, however, that no meaningful consultations were held and that, despite the persistent calls of our local farmers and producers to delay the approval of these agreements, the Philippine government still entered into such agreements with China. Currently, were continuing our legal and parliament form of struggles.

After the presentation, the participants will extend more efforts of solidarity in relation to our land justice and food sovereignty campaigns, calling for boycot against Philippine banana exporters that have hazardous effect on people’s health, and calling for joint struggle and strong solidarity against the WTO-FTA/EPA.

The UNORKA-Pilipinas presentation was followed by a speaker from Japan Mr. Hideo Iida, Osaka Board of Consumer Organizations Osaka Liaisan Office for Consumers Organizations (OSAKA SHODANNREN).

The forum was intended to create a new current for food sovereignty as the fruit of Nyeleni 2007.

Currently, WTO is at a deadlock, the world powers are putting their efforts to promote FTA (Regional Bilateral Free Trade Agreements)/EPA (Economic Partnership Agreements). The Japanese government intends to reach an agreement with Thailand, Chile and recently in Australia.

These FTAs/EPAs allow the Japanese TNCs to promote their business more aggressively in the world and open domestic agricultural market which leads to Japanese agriculture collapse in exchange for increasing the country exports of industrial products overseas. These agreements also force many countries in Asia to transform their agriculture into a export-oriented production. Under these agreements, the Asian countries will be forced to provide dumping grounds for the Japanese industrial waste and “export” nurses to Japan which will put domestic health service in crisis. FTA/EPA ruins livelihood and nature in Asia and is going backwards from the movement of food sovereignty and economic sovereignty.

More cooperation and partnership are expected to comes for the near future.