The Asia-Pacific People’s Conference on Rice and Food Sovereignty organised by the Federation of Indonesian Peasant Union (FSPI) and La Via Campesina (International Peasants’ Movement) has opened today in Jakarta at 4pm. The conference (14-18 May) is attended by 10 peasants’ organizations(1)  coming from 9 countries in Asia-Pacific (members of La Via Campesina) as well as by Indonesian farmers coming from 12 different provinces, representing their peasant union (members of FSPI). There will also be representatives of 3 international NGOs and 3 national NGOs. 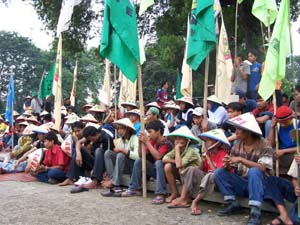 The Conference on the theme “Rice is Life, Culture, and Sovereignty” is organized parallel to the Food and Agriculture Organization (FAO) regional conference held in Jakarta (15-19 May). This people conference intents to urge the FAO to adopt the concept of “food sovereignty”. The FAO has been promoting “food security” from decades. During the World Food Summit in 1996, governments committed to cut the world’s number of hungry people by half by 2015, from 840 million to 420 million people. However, the “food security” concept has not been effective in reducing hunger and poverty. In 2004, FAO noted that the number of hungry people has only decreased by 15 millions of people. It means hunger and poverty are still massively present in many parts of the world, especially in developing and poor countries. Ironically, most poor and hungry people are found in rural areas, among farmers’ families, in the communities producing food.

As an international peasant movement, La Via Campesina promotes a concept more adapted to the realities of the peasant’s families. Henry Saragih, the general coordinator of La Via Campesina, said at the opening of the conference that : “FAO “food security” concept only relates to food availability, access to food and food safety. It does not takes into considerations where the food comes from and how it is produced. But actually, there are many other aspects to take into account, including production aspects, in order to reduce hunger in the world. This is why we hare promoting food sovereignty that also encompasses issues such as land distribution, farmers control over water, seeds biodiversity and technology. ”

In Asia-Pacific, rice is a central product in most people’s lives. Furthermore, rice is the staple food of nearly half of the people all over the world. However, rice farmers which mostly came from poor and developing countries are facing a lot of hardship in their daily lives. Hence, it’s very important to implement food sovereignty for rice production and trade to make sure that policies do not harm farmers. For example, farmers in Indonesia and in Korea have been recently hit their governments moves to liberalize their rice domestic markets.

It is important that governments from all over the world do not consider rice only as a market commodity, but that they also recognise it rice is part of the culture, the pride and the way of life maintained in the farming societies for several centuries long.

Along with the conference on rice, FSPI is also hosting and co-organising the People Assembly involving thousands of farmers, students, workers, youth, and other civil society representatives.

The head of FSPI Presidium, Wagimin, said at the press conference today : “This is time for the world to answer peasants’ and people’s aspirations. Governments have to make sure that peasants are not marginalized by political and business interests.” Hunger and poverty can not be solved on only guaranteeing food availability. The governments of the world should provide access to the means of production to the farmers. Wagimin said: “As part of food sovereignty, agrarian reform should be implemented now!”