Home » International Symposium on Agroecology at the FAO in Rome 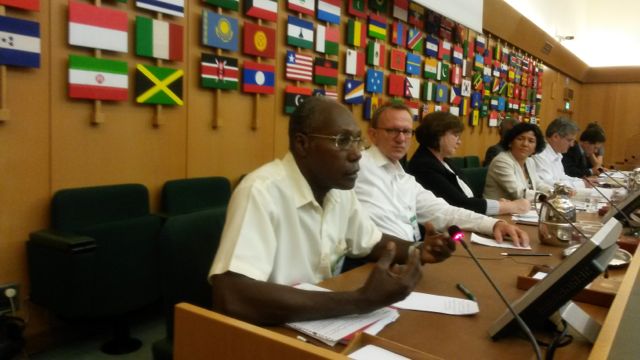 The International Symposium on Agroecology for Food and Nutritional Security was held on the 18th and 19th of September of 2014, at the headquarters of the Food & Agriculture Organization of the UN (FAO) in Rome. This marked the first time that the FAO has ever officially and directly addressed the topic of agroecology.

In his closing remarks at the Symposium, José Graziano da Silva, Director General of the FAO, said that: “Today a Window was opened in what for 50 years has been the Cathedral of the Green Revolution.” The delegation of La Via Campesina, that participated in the Symposium, welcomes this opening, but recommends caution, given the attempts to coopt agroecology that were observed at the event.

According to La Via Campesina, the science, practices and movement of agroecology are the product of centuries of accumulated peasant and indigenous knowledge, knowledge of how food was produced for humanity since long before farm chemicals were invented. This knowledge has been organized through a ‘dialog of knowledges’ (dialogo de saberes) with the western sciences of ecology, agronomy, rural sociology, etc.  Support for agroecology, among rural social movements, consumers, environmentalists and others, has grown a lot in recent decades, in part because of it’s sharp critique of, and it’s alternatives to, the badly-named ‘Green Revolution’ of industrial agriculture.  For La Via, peasant agroecology is a fundamental building block in the construction of food sovereignty.

Governments and institutions, the majority of which respond to the interests of national and transnational agribusiness, have resisted agroecology. In fact, to speak of the alternatives embodied in agroecology, has until now been taboo in institutions like the FAO. Still, this situation has been changing of late, though only partially.

The rapid degradation of soils and other productive resources brought about industrial farming practices, and climate change, have now created growing uncertainty about the future of industrial agriculture. And the number of scientists with studies and data that show agroecology to be a superior approach, in terms of both productivity and sustainability, is growing. The result has been more institutional opening to agroecology.

But the opening is relative.  While social movements like La Via Campesina see agroecology as the alternative to industrial agriculture, and highlight it’s potential help in transforming grim rural realities, the new institutional opening is geared more toward a scaled-back version of agroecology.  This version is limited to seeing agroecology as nothing more than the source of a few new tools for the toolbox of industrial agriculture; in other words, of methods to reduce the negative impacts of industrial farming practices on future productivity.  Those who promote this shrunken approach use names like ‘sustainable’ or ‘ecological intensification,’ or ‘climate smart agriculture,’ to refer the erroneous idea that agroecology is compatible with large extensions of industrial monoculture, pesticides and GMOs.  For La Via Campesina, this is not agroecology, but rather is a blatant attempt at cooptation, which should be denounced and resisted.

A decent sized delegation from La Via attended the Symposium at FAO, with delegates from  Mozambique, India, Haiti, Cuba, Brazil, Mexico, Nicaragua and Italy. Three of the delegates were speakers. The delegation arrived expecting the worst, ready for a pitched battle against the cooptation of agroecology.  The reality was actually somewhat more refreshing, as the majority of the scientists who were invited as expert speakers, presented visions of agroecology that were quite similar to the vision of La Via. They pointed to agroecology as an alternative, for transformation, and highlighted it’s social, political, economic and cultural contents, in addition to the technical content.  This left the tendency toward cooptation as a minority position, though it was present, and evident.

As a result, the summary of conclusions from the Symposium, presented by the reporting team on the second day, emphasized positive points, including the affirmations that:

And furthermore, that the principal challenges to be faced, must address complex but urgent issues, such as:

Chavannes Jean-Baptiste, a Haitian peasant leader, and member of the International Coordination Committee (ICC) of La Via Campesina, said that “this Symposium represents a step in the right direction for FAO,” but he issued a warning about the developing conflict “between good and evil,” over the definition and future of agroecology.  Given this dispute, he spoke of the need to specify ‘agroecological peasant agriculture,’  because “agroecology is a way of life for us, not just a mode of production.”

Rilma Román, a leader of the National Association of Small Farmers of Cuba (ANAP), who is also a member of the ICC of La Via, highlighted the centrality of “peasant knowledge and practice as the true basis of agroecology.” She insisted that in countries like Cuba, “peasant agroecology is not theoretical, rather it is already a reality.”  Andrea Ferrante, leader of the Italian Association of Biological Farmers (AIAB), emphasized that, “agroecology is also a reality in Europe,” though he complained that “the fact of agroecology in the North was pretty much ignored in this Symposium.”

Marciano da Silva, of the Small Farmers’ Movement of Brazil (MPA), called for vigilance, as we will face ever more attempts by agribusiness and institutions to coopt agroecology.  He remarked that while the FAO, and the ministers of agriculture from several countries who spoke at the Symposium, made public commitments to agroecology, “it is up to us to hold them to those commitments.”

Renaldo Chingore João, from the National Peasants’ Union of Mozambique (UNAC), underlined the importance of the tacit recognition by FAO that “the Green Revolution is in rapid decline,” and said that “it is important to transmit this message to our African governments.”

Nandini Kardahalli Singarigowda, a successful agroecological producer from the Karnataka State Farmers Association of India (KRRS), said that “we peasant women of KRRS in India are already successfully promoting agroecology,” and asked, therefore: “why can’t the FAO do the same?”  Finally, Chavannes Jean Baptiste of the Via Campesina Haití, explained that “agroecology is above all a social and organizational process.”  “It requires,” he said, “peasant organizations and rural social movements who are capable of building social processes based on horizontal learning and peasant protagonism.”