Home » Industry benefits but does not pay its dues. Patents are an assault on genetic resources

First published in Farming Matters |  May 2016 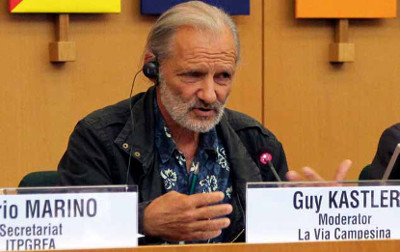 Patents increasingly undermine the strong legal edifice patiently constructed by UPOV (1). However, the International Treaty on Plant Genetic Resources for Food and Agriculture guarantees free access to the main industrial resource of plant breeders – peasants’ seeds collected from farms across the world.

This article argues that broadening the reach of patents over genetic resources is increasingly replacing benefit sharing, which undermines the multilateral governance of our common heritage.

It concludes that the Treaty offers a new legal basis to govern access to plant genetic resources for food and agriculture and to compel industry to pay its dues.

Patents instead of benefit sharing

States regulated this promise in the 1992 Convention on Biological Diversity (CBD). Through this Convention, countries in the global South gained sovereignty over their biological resources as well as the right to negotiate prior informed consent and the sharing of benefits. As a consequence, states then became the main actor to decide whether or not there would be benefit-sharing with those communities that had conserved these resources and possess the associated knowledge. In order to share benefits, it would be necessary to identify the source of the genetic resources used in final, commercial products.

However, as most of the samples taken from the vast reservoir of resources in countries in the global South are no longer identifiable in commercial products, no benefit sharing has taken place. In place of the benefit sharing promised in 1992 but never implemented, there has been acceptance of patents on living organisms. This was imposed in 1995 on almost all members of the World Trade Organisation (WTO), through the agreement on Trade Related aspects of Intellectual Property Rights (TRIPs). Now, 20 years later, benefits are still not being shared, but patents on living organisms have conquered the planet.

The International Treaty on Plant Genetic Resources for Food and Agriculture, which came into force in 2004, was designed to ensure that the diversity of the plants that supply, directly or indirectly, all the food in the world, and which has been developed by peasants everywhere, was safely conserved – protecting this ‘heritage of mankind’ in the public domain. A second goal was that these resources would be used in ways which regenerate their diversity. A third goal was that any commercial benefits derived from the use of the diversity of plants would be shared, especially with the peasant farmers who historically provided the resources and who currently conserve diversity on-farm. In addition to developing a system for formalising international seed exchanges and tracking their use, this landmark Treaty codified what should be considered ‘inalienable’ farmers’ rights.

The modern varieties that are available commercially often come from dozens of different plants, originating from all over the globe, whose genetic resources have been crossed, re-crossed, swapped and exchanged, between researchers, collectors and breeders. According to industry, it is not possible to ensure effective traceability of these multiple transfers and then to trace the attribution of the initial resource in the final product. The bilateral obligation to prior informed consent and benefit sharing for each exchange of seeds is thus not applied in practice. Since under this premise national sovereignty over internationally diverse genetic resources, as enshrined in the CBD cannot be applied, a multilateral system of facilitated access and benefit-sharing (MLS) for some of these resources has been included in the Treaty.

The genetic resources covered by the MLS only apply to the 64 cultivated crop species and 29 forages listed in annex 1 of the Treaty. For the transfer of the genetic material of these crops, the MLS does not require prior informed consent. For other crops, transfers need to be covered by bilateral contracts that include prior consent and benefit sharing.

In return for agreeing with the MLS, industry agreed to the establishment of a benefit sharing fund, designed to be funded by royalties generated from the use of seeds provided under the MLS. By agreeing to the Treaty, industry also accepted the recognition of Farmers’ Rights to use, exchange and sell their farm saved seeds.

However, the problem is that the enforcement of Farmers’ Rights remains the responsibility of States. The majority do not enforce the Treaty, despite signing it, and the Treaty does not contain enforceable measures to require the recognition of Farmers’ Rights. In addition, facilitated access to PGRFA under the MLS is only foreseen for research, breeding and training purposes, but not for crop production. The decision whether or not to give farmers access to the PGRFA and seeds which they have given to the MLS, even if by their parents or colleagues, is left to the goodwill of States.

Despite the MLS and Farmers Rights, industry has still not contributed significantly (in proportion to global seed sales) to the Benefit Sharing Fund of the Treaty. Rich countries seem to prefer to give their money to the Global Crop Diversity Trust, which funds their ex situ gene banks. Meanwhile, the Treaty has no way to force industry to repay its debt, which should be a condition of access to MLS resources, respecting the commitments made by signing a Standard Material Transfer Agreement (SMTA). As a result, the current way of funding benefit sharing is completely ineffective.

There are options available. Countries can directly tax the profits from the marketing of seeds within their territory. La Via Campesina has proposed that such a tax should be proportional to the quantity of seeds and plants sold, as well as being subject to legal, contractual or technological restrictions limiting their use for research, plant breeding, agricultural production or the production of farmers’ seeds.

The International Seed Federation (ISF) does not accept any form of compulsory payments other than those related to the SMTA. Though it is the first to say that even though these are not affordable, the ISF also is well aware that that these obligations are very easily circumvented. ISF also proposes that ‘clubs’ which organise a private market of license fees should be considered as a form of non-monetary benefit sharing, and that, by using plant variety protection measures, it removes payment obligations to the MLS (2). Thus, almost no one is forced to pay.

Industry has managed to transform its obligations for benefit sharing into voluntary donations. These donations are directed to financing new collections, prebreeding and pre-selection programmes, and above all information on plant genetic resources. Pre-breeding enables businesses and research centres to sell preselected genetic resources, which can then be developed into multiple varieties with each variety adapted to specific growing conditions. Will the MLS end up as a completely liberalised market for pre-selected plant genetic resources?

Improving information is the stated purpose of the DivSeek programme, which aims to build a digital database to bring together the genetic sequences and phenotypic data of all the resources in the MLS. But this is a dangerous initiative because such a database could facilitate the patenting of native seed characteristics. La Via Campesina has therefore denounced, in strong terms, the involvement of the Treaty in this programme.

Ten years after the Treaty came into force, the CBD secretariat led the creation of the Nagoya Protocol in 2014. The Nagoya Protocol gives each member country the legal possibility to limit access to its national market by only allowing seeds that are accompanied by tangible evidence of compliance with payment obligations of the Benefit Sharing Fund. The Nagoya Protocol defines the binding rules that the contracting parties must apply when exchanging and utilising genetic resources. Any transfer of plant genetic material of a species not included in the Annex 1 of the Treaty, and which is not covered by bilateral contract with prior consent and benefit sharing, is illegal. These include important species such as banana, soy, and tomato.

This is the reason why recently the major seed industry countries (including EU, Canada, Australia) have sought enlargement of the MLS to include all crops under the Annex 1. Countries in the global South, including large economies such as Brazil and India, have refused to negotiate enlargement of the MLS until commitments on benefit sharing relating to existing resources under the Annex 1 and on Farmers’ Rights have been realised.

The Treaty has embedded powers

Despite its shortcomings, a number of small scale farmer organisations, including La Via Campesina, have supported the Treaty and are trying to improve it. There are two reasons for this:

The Treaty offers a new legal basis to compel industry to repay its dues whenever it sells seeds in a member country. It could also govern access to MLS resources and prohibit the patenting of native traits, limiting their use for selection, research or agricultural production. The Treaty could withdraw from DivSeek, as patents on native traits in plants are not allowed. It could put pressure on FAO to initiate discussions with the World Intellectual Property Organisation to prohibit such patents, in the name of food security. Its members could cite the absence of the agreed review of Article 27.3(b) of TRIPs, which should have been done by 1999, to ban these patents in their own legislation and internationally. They could reject the privatisation of our common heritage through patents, which benefits only a handful of multinationals.

Peasant farmers are calling for state authorities to defend the multilateral public governance of our common heritage. On this depends both food sovereignty and the sovereignty of each country.

(1) From the name of their main sponsor, the Union for the Protection of new Varieties of Plant (UPOV in the French acronym – l’Union pour la Protection des Obtentions Végétales), which brings together countries that have adopted Plant Variety Protection (PVP) as the industrial protection tool for cultivated plant varieties