A large number of small farmers and peasants in Indonesia took out a massive protest against the cheap imports of potatoes, which has thrown the local varieties out of the market and has caused distress to local farmers.

The statement issued by the Indonesian Peasants’ Union read as follows;

We, potato and horticulture peasants from particularly peasants of Dieng Plateu were worried again by circulation of imported potatoes in traditional markets which have lower price than local potato. Noted that throughout January to September 2016, import volume of potatoes reached 65.195,11 tons.

The importation of potato cause massive loss to potato peasants in Indonesia. Potato peasants of Dieng Plateu, Central Java, have allegedly lost Rp 24,000 on each hecatre. The total potato land area in Dieng Plateu around 15.000 hectare and the loss is estimated to be about Rp 360 billion annually.

In normal condition, peasant potato is usually sent to Jakarta and other areas. But, as a result of cheap potato import -particularly from China and Pakistan – Local potato varieties are pushed out of the market. In Jakarta Kramat Jati Market, on 24 October 2016, Peasants potato was sold around Rp. 8500/kg while import potato was only sold around Rp. 6.000/kg. After import potato spread into traditional markets, local potato was only appreciated around Rp.6.500/kg at the peasant level. By selling price around Rp. 6.500/kg, local potato peasants experienced many loss about Rp. 12 million/hectare at each planting season. Where in a year at least there is twice planting season. Meanwhile to fulfill capital, peasants have to selling potato at minimum price around Rp. 7.500/kg. 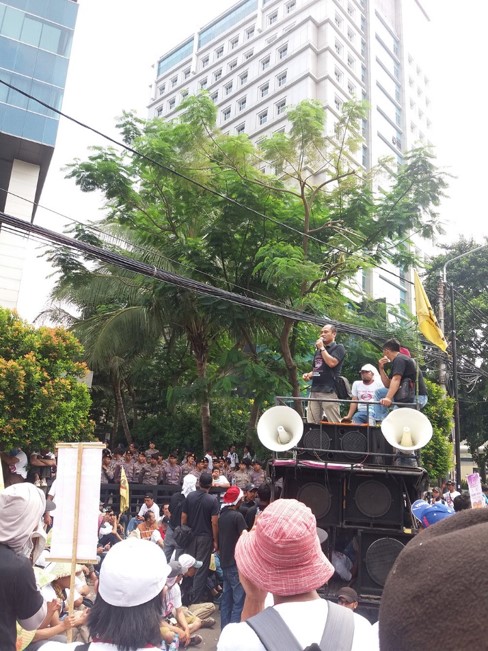 Not only potato, based on data of data center and information system of agriculture ministry, some of horticulture crops throughout January to September 2016 was also imported and it spread into traditional markets. These are fresh carrot from China, Australia, Malaysia and New Zealand as much as 26.047 tons, 1.767 tons of fresh cabbage and 45 tons of fresh spinach from China, Australia and France.

Free Trade Agreements pushed through WTO and bilaterally are the root cause of this price crash and crisis. The impacts of trade deals and partnerships such as the AEC (Asean Economic Community) and CAFTA (China-ASEAN Free Trade Agreement) is devastating. The free trade mechanism will be more strengthened by approval of RCEP (Regional Comprehensive Economic Partnership) leading to more distress.

Even though RCEP is a new kind of agreement, but it is still maintain the form of free trade which previously exist. Even RCEP can be called as more expansive action of market expansion because it involved cooperation between ASEAN members and China, India, Japan, South Korea, Australia and New Zealand. It means that food and horticulture crops import policy, potato in this case, already done systemically and planned.

The following of basic things of peasants which must be fulfilled by government: