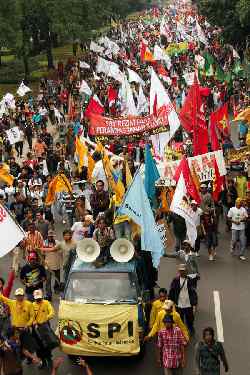 (Jakarta, 12 January 2012) A large rally demanding agrarian reform and people’s rights shook Jakarta and 27 other provinces all across Indonesia on January 12. At least 7 thousands of people marched from the Supreme Court to the Presidential Palace and ended up at the House of Representatives.

47 organisations joined in what they called the “Joint Secretariat of the Indonesian Movement for Recovering People’s Rights’. They declared resistance and denounced land grabbing facilitated by the SBY-Boediono regime throughout Indonesia.

This huge coalition, led by Serikat Petani Indonesia, various other peasant movements, fisher folks, workers, indigenous people, women, youth, students, village governance groups and NGOs, rattled the street in a fight against recent land grabbing cases in Mesuji and Sape. Both cases involved casualties among the populations perpetrated by corporations and the police.

The current cases in Mesuji and Bima that became public late 2011, show that the police did not hesitate to kill people who resist land grabbing. The National Police has clearly and openly become a mercenary force for plantation, mining, and forestry companies.

The concrete proposals from the protesters were to immediately implement Agrarian Reform and Village Reform for Ecological Justice.

“We want the land of the people to be returned to the people. Fishermen, farmers and workers also need to be taken care of. We’re not supposed to be ignored while the government favors businessman,” said Henry Saragih, chairperson of Serikat Petani Indonesia in a speech.

“The people are now demanding the implementation of genuine agrarian reform in form of government regulations based on  the 1945 Constitution and Basic Agrarian Law No. 5 1960,” he continued. “What happened in Mesuji and Sape is clearly land grabbing, done by the state and private corporations. We need to stop this.” The rally participants chanted the movement song “Darah Juang” later, demanding land and water for the people.

The Joint Secretariat of the Indonesian Movement for Recovering People’s Rights filed 12 demands to the Supreme Court, Presidential Palace and the House of Representatives. Among them are the proposal to conduct legal and socio-economic audits regarding permits given to both private corporation and state enterprises to use use agrarian resources.

The demonstration was touted as one of the best coalition actions in the Indonesian movement’s history. It was also praised because of the cross-sectoral platforms, and the ability to translate the people’s concerns into concrete proposals. This could trigger a far wider and bigger people’s movement in agrarian reform issue.