By Via Campesina Secretariat, South Asia

Muzzafarnagar: Hundreds of Indian Farmers from the Bhartiya Kisan Union (BKU) stopped a goods train carrying a consignment of about 26,000 quintals of Brazilian raw sugar in the state of Uttar Pradesh (U.P.) on 31 October and burnt a few sacks of raw sugar. The train eventually went back the next day when the farmers threatened to set fire to all the sugar onboard if the imported sugar was not returned. 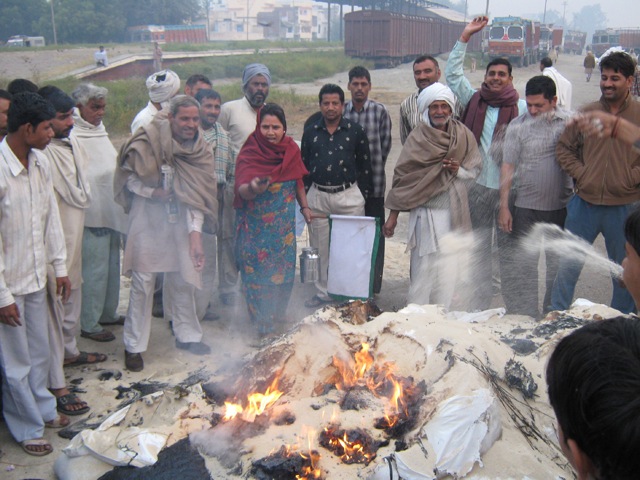 Farmer’s from UP have been protesting over the past couple of years over procurement delays and the lowering prices of sugarcane. Their incomes are falling but their costs are rising. More expensive farm inputs are also leading to increasing indebtedness. Overall the price of sugarcane set by the state government falls very short of covering farmer’s expenses for the actual growing of sugarcane. The recent drought in India has halved sugarcane production while doubled the costs of inputs. The farmer’s are demanding a price of about Rs. 280 (around $6USD) which reflects their actual cost of production, however, the state government has set a price of only Rs. 165 (around $3.5USD). Instead of helping farmers in this crisis, the Indian government went ahead and purchased imported sugar from Brazil. Ironically, despite increasing the selling price of processed sugar for consumers, the government of India has maintained the price of raw sugarcane for farmers at a low Rs. 107.76 per quintal for the year 2009-2010.

The liberalization of agricultural trade through free trade policies and the World Trade Organization rules is an onslaught on the very survival of farmers. It is resulting in cheap imports of agricultural produce, the constant lowering of agricultural produce prices, the increasing costs of inputs and the lowering of state support to local farmers in India. Moreover, the farmers are not even consulted for price setting. This is a dangerous trend in a nation like India which on the one hand prides itself on its new status as a emerging economic power, while the majority of its population, farmers and rural people, are struggling for two meals a day. Stories of farmers suicides have become a common occurrence in India and even in U.P. sugarcane farmers are committing suicide due to pro-corporate and anti farmer agricultural and trade policies. Recently a farmer from Rangel village, Narendra Kumar (40), killed himself by self immolation after setting his sugarcane crop on fire because the sugar mills are not procuring sugarcane and millions of farmers in the sugarcane belt of Uttar Pradesh are protesting against the government which is just a mute spectator and playing at the tunes of sugar mill owners. For mill owners it is cheaper to import foreign raw sugar than buy the sugarcane from local farmers. This is also resulting in drastic rise in the retail prices for sugar which is almost double in this year alone, from Rs. 20 per kg to Rs. 40 per kg.

India’s sugarcane farmers continue their struggle and they refuse to disappear. They have decided not allow the imports of cheap raw sugar in UP and stated that if it enters the state territory, it will be burnt. They have also taken a pledge that all goods trains with imported raw sugar for processing in sugar mills in Uttar Pradesh will be stopped.

Later on the 1st of November at the banks of the holy river Ganga in Gadhmuktashwar, UP farmers under the leadership of BKU president, Mahendra Singh Tikait took a vow to stop sugar mills until they received a fair price for their produce.