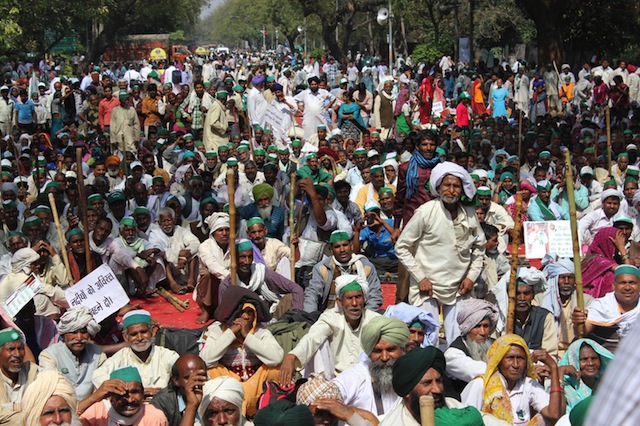 New Delhi, March 19, 2013: On the second day of a large farmers’ rally in the heart of India’s capital here today, the Mahapanchayat (great assembly) of farmers and agriculture workers resolved to stay put until their demands are met. In a historical new formation, people’s movements and large farmers’ unions have come together to defend land rights and protect farm livelihoods. Lambasting the government for its anti-farmer policies, speaker after speaker rejected government’s development paradigm, which neglects rural India and agri livelihoods. The night saw thousands of farmers sleeping on Parliament Street in the open, with the government choosing to ignore them. “We are the Anna Daatas who keep the nation alive and the government cannot continue with its impoverishment policies towards farmers. More people are headed towards Delhi now and it looks like the government will respond only when an issue reaches a flash point”, said Yudhvir Singh of Bhartiya Kisan Union.

The main demands of the Mahapanchayat include: (a) no land acquisition and taking back the land acquisition bill with its amendments to the standing committee, (b) enacting a farmers’ income guarantee act, (c) cancel free trade agreements, (d) promote ecological farming and stop toxic technologies like GMOs and pesticides.

“Two years ago, empty promises were made to us by the government; this was by the Prime Minister himself making assurances to us on March 8th, 2011. This is tantamount to cheating the largest chunk of citizens of the country and this is unacceptable. If the government does not act this time to respond to this non-violent movement, it would only reinforce the public perception and knowledge that the government is deaf to the needs of its citizens”, said a statement from the Panchayat.

The assembly saw many women farmers joining actively in the rally. Yesterday, there was a symbolic burning of the government’s land acquisition bill to show that it was unacceptable to the gathering. The Mahapanchayat also declared that unless the PMO responds to their demands, they will not move out.