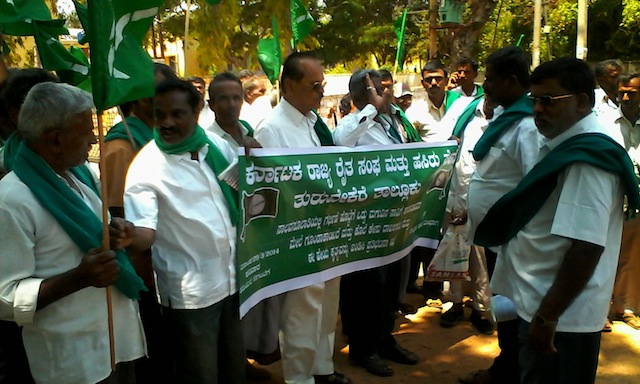 At noon on March 29, 2014, a human chain of over a hundred farmer activists, each with his green shawl across his shoulder, stopped buses, trucks, and motorcycles in the busiest intersection of Doddagoragatta village (Tumkur District, Karnataka, India). In the midst of these Karnataka Rajya Raitha Sangha activists, stands Sridhar, a man in his mid-twenties, eyes swollen and tired. He holds a yellow plastic bag. Among the contents: a bank passbook (documenting payments and withdrawals), a hospital bill for 50,000 rupees, and a printed photo of a stillborn child.

In the past two weeks, he has gone from an expectant father to a mourning husband. During a violent altercation on March 18, corrupt loan officials beat his wife, Manjula, til she was unconscious. She was seven months pregnant. On March 23, the baby was pronounced dead.

Sridhar told us his story, using the yellow-bag documents as evidence: “I took out a loan of 10,000 rupees from a private society for a vehicle – an autorickshaw so I could earn supplementary income. I paid back each and every rupee. Here is the proof! Later, my father-in-law took out an agricultural loan of 20,000 rupees from a government society. They sanctioned the loan, but never gave him the payment! He was left with 20,000 rupees debt. When we demanded to know why they hadn’t given the money, the four loan collectors said that my loan had never been paid back! They were running a giant fraud. We got into a fight.”

His mother-in-law continued, “My daughter Manjula intervened in the fight, and tried to talk reason to everyone there. The loan collectors beat her. They pulled her hair and pushed her down. She collapsed unconscious. We took her to a hospital immediately, and when she complained of stomach pains we brought her to this private hospital.”

Manjula, 24 years old, was seven months pregnant with her first child at the time of the fight. The doctors told her that the stomach pain corresponded to the baby’s death. The four men in question have been put in jail under the sections relating to verbal abuse, physical abuse, threats, and intention to murder. The farmers’ union is demanding they be tried for murder itself. The men in question have been in and out of jail many times for similar crimes and this time, KRRS activists say, they must stay there.

Sridhar and his wife Manjula share the lot of the majority of the farmer community in rural India as they face the uncertainties of hand to mouth subsistence and drought. They are financially trapped between loan collectors, rising prices of agricultural inputs, and social expectation to spend on occasions such as weddings. The agricultural loan that Manjula’s father tried to take out was meant to purchase the necessary inputs to make their 1.5 acres productive enough to feed their family. It would have been paid back not from returns from agriculture (of which there are none) but from daily labor on others’ fields.

It is for these farmers that KRRS is fighting, as a member of the International Peasant’s Movement La Via Campesina. After stopping traffic for half an hour, they moved to the local government office, where they agitated for another hour. Besides demanding that the goondas be tried for murder, KRRS demanded that the government follow the national law prohibiting loan collection during drought and compensation to Sridhar and Manjula for the murder of their child. The local government received them and acknowledged the demands.

Next, the KRRS activists moved to a local bank to demand that the bank establishes a counseling body to mediate between drought and debt affected farmers and loan collectors. To ensure that the hospital fees be waived, fifteen remaining activists spent several hours waiting and courting the spiritual leader at the top of the group of institutions of which the hospital is a part.

The last stop was to the hospital itself, to share the day’s news with Manjula, Sridhar, and their families. Sridhar met us outside the hospital and walked us to the room. Passing signs promoting “Healthy Mother, Healthy Child,” with drawings of lookalike families, I was only reminded of the image of his stillborn baby. We tramped through the intestines of the hospital, eventually reaching Manjula in the depth of the general ward. The room had fifty-odd beds, with dividers between every two rows. In one bed sat a woman with a covered crib next to her; on another bed slept a tiny-framed woman with an especially tiny baby; from another bed a grandmother picked up a child and carried it across the room.

Manjula laid in her corner bed in the fetus position, not making eye contact with any her visitors. Her mother stood and greeted us. The fifteen KRRS activists, men from their late twenties to late sixties who travelled from Shimoga, Bellur, Ramnagar, and in between, were out of place in the OBG ward, one of the few female-dominated spaces to be found in the Indian context. As Manjula’s mother told us the story of her daughter’s beating, women from around the general ward gathered and listened. Manjula broke into tears, the fingers of her outstretched hand twitching slightly. Sridhar, not comfortable holding her hand outright, inched slightly closer to her. The activists reported to them the activities of the day: the pressure they put on the local government, the bank’s commitment to establish a counseling body, and, most recently, the promise by the hospital to waive the fees, upwards of 50,000 rupees.

One of the first issues KRRS tackled when it was founded 30 years ago by Professor MD Najundaswamy was corrupt government and cooperative society officials. Loan collectors would come to farmers’ doors at any time of the day or night. They would demand to be let in, bringing dirty boots and dirty language. They would beat and harrass the women. They seized livestock and other collateral illegally.

But as farmers organized, they created a counterculture, in which corrupt officials would be punished according the village’s judgment. Livestock was re-seized by groups of activist farmers. Wearing the green shawl was and is more than a symbol of groupism, it signifies self-respect: “When KRRS started, if one farmer went to a government servant to file a complaint, they wouldn’t even offer him a chair. But in a group, wearing green shawl, farmers don’t need to be offered a chair. They demand one, because they have self-respect,” tells Chukki Nanjundaswamy, the daughter of the late founder and herself an ardent activist.

Yesterday, as I rode with KRRS activists demanding justice for Manjula, Sridhar, and their family, the personal transformation of each activist was undeniable. Whether at a bank, hospital, government office, or agitating in the middle of the road, the activists were articulate, militant, and protagonists in these matters of injustice. Yesterday’s actions are victories which must be a part of a larger justice. Justice for agricultural women, who work harder and suffer more than their male counterparts. Justice for small farmers in the Global South, who must bear all of the risks of the Global North’s climate-changing consumerism and industrial agriculture. And justice for the future children of couples like Sridhar and Manjula, to give them the opportunity to live the lives their parents dream for them and they dream for themselves.