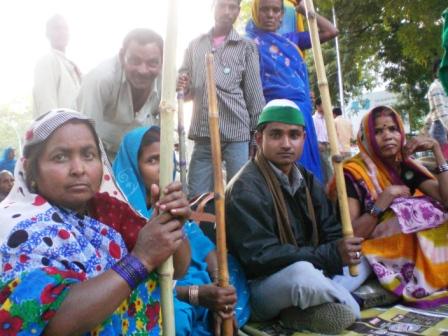 The Karnataka State Government has colluded with a private company called “N.I.C.E” and decided to sell them valuable fertile, irrigated lands of farmers under the pretext of development.

We farmers are not against development but at the same time we should be compensated properly and there should be development for us also. We demand that market rates are paid for the lands being acquired from us. If the Central government evicts the farmers then nearly 50,000 farmers will loose their lands, jobs and livelihoods. There is great corruption behind this project and most acquired land is not used for the purported purpose but for real estate business. The Mining Mafia has also been looting and grabbing large tracts of lands in all the districts of Karnataka. This land grabbing has become a major problem.

The Karnataka State Government, proposed to allot 23000 acres of well irrigated fertile land to a private company to form a corridor road from Mysore to Bangalore which is actually unnecessary at the moment. The existing state highway is enough to carry vehicles for another 100 years. If people think otherwise, then widening the existing state highways by 10 meters on either side will be more than enough. But we question: What is the necessity to go for a completely new road at the cost of thousands of farmer’s livelihoods and the destruction of such fertile lands needed to grow food for India’s growing population.

On the one hand the Central government is insisting on the need to increase food production, while on the other hand the state governments are selling off fertile agricultural land for unnecessary construction projects to private parties. How then will we feed a 120 crore and growing population?

Even if we do consider this project as essential then just 3000 acres is more than enough to form a road from Bangalore to Mysore which is only 120 Km at a 100 meter width. Then why has the state government acquired 23000 acres? There are obviously some bad intentions behind this project but the state government turns a deaf ear to farmer’s pleas and demands. Lakhs of acres that have already been acquired by the government have not even been used for the supposed purpose. Only 25% of the lands were used while the remaining land was used for real estate business and money making.

Once again we reassure that we are not against “development” and in fact we are also ready to sell our lands when needed but only for the formation of the road not for real estate business. Evicting farmers from their native lands and brining outsiders to gamble and profiteer from that sacred land is absolutely unethical and the governments role as middleman in this unethical business is even worse.

We therefore place the demand that these illegal, violent and corrupt activities by the sate governments should be stopped immediately and justice should be given to the poor small farmers. The time has now come for peace, dignity and justice for the majority rural and farmer populations of our country.