Home » India Enraged: Farmers warn of larger agitation if the government continues with its apathy

In two days, two major cities of India – Mumbai and Delhi – witnessed thousands of farmers and farm workers demonstrating peacefully but with a steely resolve to make themselves heard.

While on Monday, over 50,000 farmers were camping in Mumbai, the country’s financial capital demanding for complete and unconditional loan waivers and right of ownership over their territories, Tuesday saw thousands of small and medium farmers of North India laying siege to the New Delhi’s Parliament street peacefully staging a day-long demonstration asking for fair price, debt waivers and more.

Bharatiya Kisan Union, that organised the farmers on Tuesday also submitted a memorandum to the Vice President of India demanding his intervention to force the Central Government to listen in to their situation of despair and possible solutions.

Here is the full text of the note released by Bharatiya Kisan Union, that is also a member of La Via Campesina in South Asia.

It is quite unfortunate that in last four years NDA regime has been witnessing wide spread agrarian distress and unprecedented farmers unrest across India. The farm unrest is aggravated by the failed promise of NDA government to implement Swaminathan Report and ensure C2+50% rates for farmers produce as well as pro-corporate schemes on crop loan and contract farming which is meant benefit big corporate houses at the cost of small and marginal farmers and farm labourers.

On the one hand Modi government shed crocodile tears in the name of scarcity of funds for not offering any loan waiver for farmers but on the other hand the same government provide huge tax benefits and custom and excise concessions to businesses and crony capitalists.

The Anti Nationals like Nirav Modi, Lalit and Vijay Mallaya who have looted crores of tax payers money and are accused of defrauding Banks have been allowed to run away from the country while innocent farmers have Rs.5000 to Rs.10,000 of farm loan are being harassed and are forced to commit suicides. 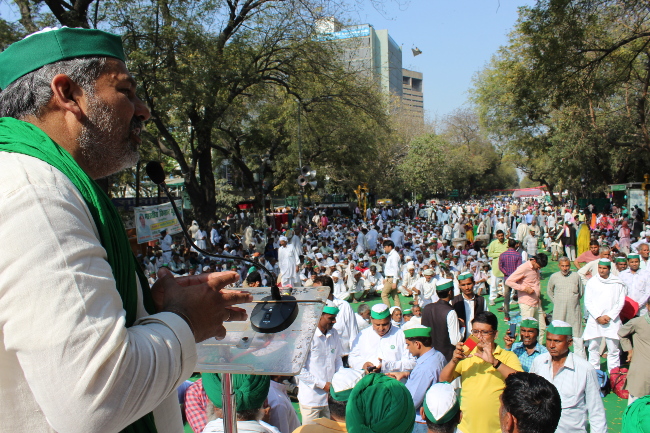 In view of the increasing numbers (from 628 in 2014 to 4837 in 2016 as per NCRB) of farmers’ protests across India, the Modi government offered another bait (formally presented in the finance minister’s Budget speech for FY17) to farmers of doubling their farm income by 2022, five years from now. However the hollowness of government promise lies in the fact that there is no Data on the current real income of farmers and relies on five years old data of National Sample Survey conducted between July 2012 to June 2013 which indicates an average monthly income of a farmer’s HOUSEHOLD as Rs. 6426 [of which only about 60% was from farm business (i.e. Rs. 3856)]. This comes to Rs. 1285 per member (considering that there are five members in a farmers household) and in 2022 this would probably get doubled to Rs.2570, which would not be a substantial raise to farm income given the increasing inflation. Interestingly, the Economic Survey of 2018 candidly admits the failure of the Government in raising the incomes of the farmers (which remains stagnant in the past four years), yet the government believes that they would double the farmer’s income by 2022. The BKU believes that’s the NDA government of increasing farm income will remain an empty promise as has happened with their election promise to provide C2+50. That is the reason, the BKU demands for a guaranteed fixed minimum income for farmers. And to realise this, BKU demands for a Farmers’ Income Commission, which would launch a survey to assess the current income of farmers, and based on that it will ensure a fixed monthly income for small and marginal farmers. 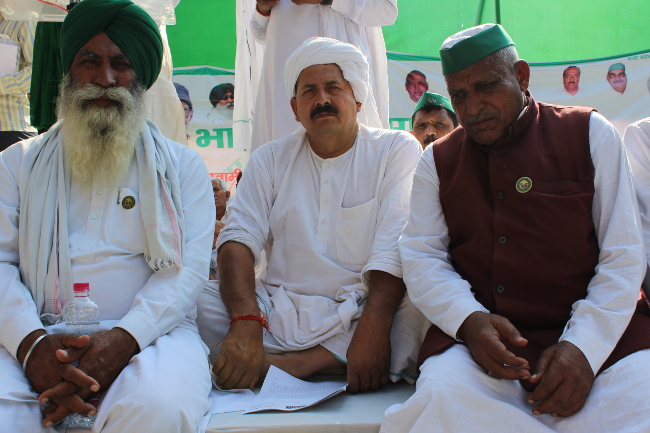 Naresh Tikait of BKU (at the center) was among the farmers’ leaders present at the demonstration.

Four years after coming into power, the Modi government made an half hearted attempt in the Budget 2017-18 to offer remunerative price for farmers produce but they deliberately chose a wrong formula. Instead of offering 50 percent above the comprehensive cost of production (C2) which includes imputed rent as well as interest on owned land and capital besides A2+FL, the Modi government offered only A2+FL which includes actual paid out cost plus imputed value of family labour. In last ten years or so, the Commission on Agricultural Cost of Prices (CACP) have declared the MSP at 50% higher than the A2+FL. There is nothing new in the Budget announcement of 2018-19. The Budget announcement is contrary to the promise made by the BJP in its 2014 Election Manifesto. A2+FL formula is totally unacceptable to the farmers. The BKU demands that the government gives a 50% margin over the comprehensive cost of production which must be over and above the A2+FL. The BKU also demands that the NDA government must take serious steps to have efficient procurement mechanisms in place so that farmers get assured MSP for their produce. At present, the MSP announced for most crops is only notional as there is no procurement mechanism in most parts of the country. The BJP governments in the Centre and in all the 21 States must ensure procurement at the MSP rates. 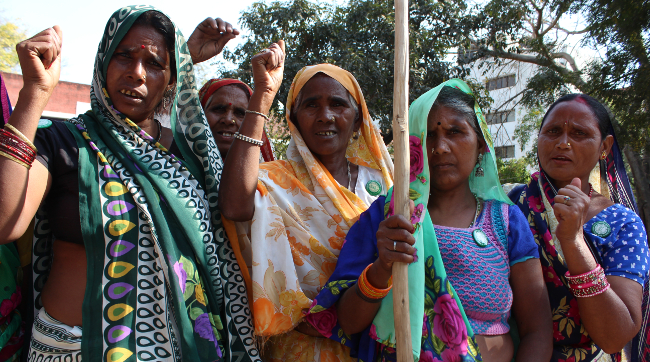 The Government of India is hosting the WTO Mini Ministerial in Delhi on 19th and 20th March where 90 countries are expected to participate. We believe that Indian government is hosting this Mini Ministerial to get permanent solution for the pending agricultural issues in the WTO, which includes permanent solution for the public stockholding for food security, Special Safeguard Mechanisms as well as reduction of agricultural subsidies by the developed countries. The BKU demand that India must stand firm in its resolve to get a permanent solution for the food security issues and No Deal is made to compromise Price Support for Indian farmers. Due to the faulty policies of WTO and other trade agreements, India is becoming a dumping ground for all agricultural produce and import of agriculture goods in India have skyrocketed during Modi regime. BKU therefore demands that agriculture Must be OUT of WTO and India government do not include agriculture in any bilateral deals including Free Trade Agreements. 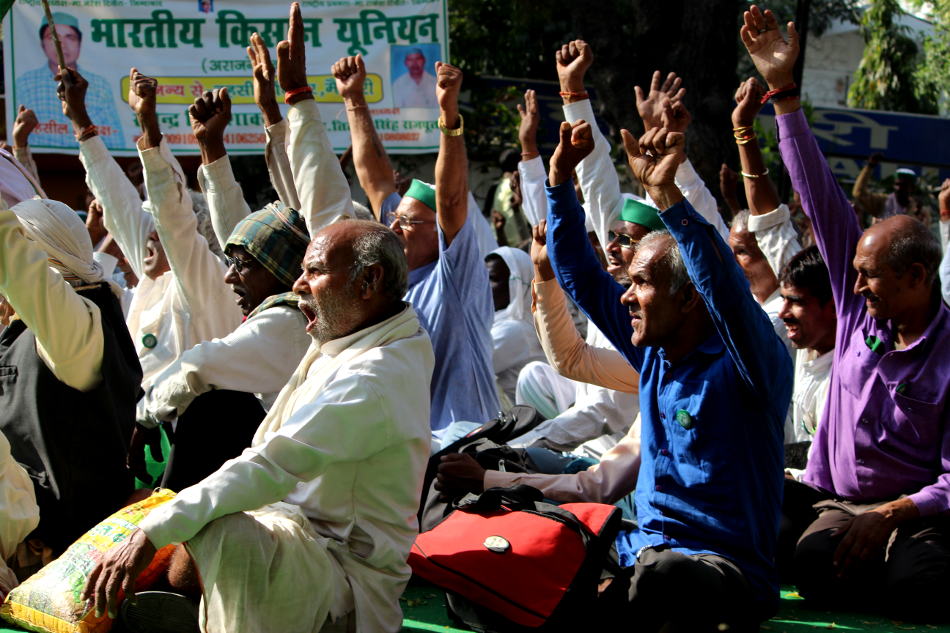 The BJP had in its manifesto promised that it will not introduce or commercialize GM food crops and will impose ban on GM seeds and plants but their government’s Economic Survey of 2016-17 mentions that GM crops should be promoted for food security. Even the developed countries which have adopted GM crops on a large scale are facing lot of challenges with regard to food security. The BKU demands that the cultivation of all GM crops including GM Mustard must be banned and budgetary support should be provided for the promotion of Agroecology and toxic free farming. 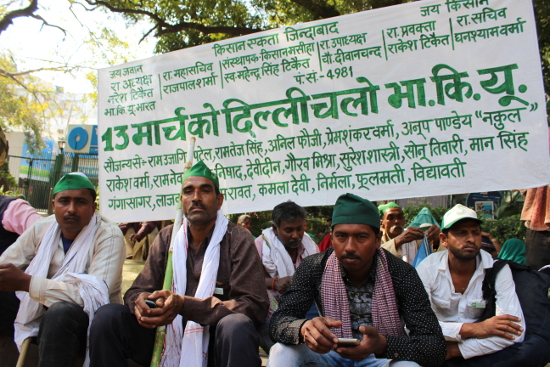 There have been no price increases for sugarcane in all sugarcane-growing states in the past two years. Sugarcane farmers have also not been paid their arrears. The BKU demands that arrears be paid to sugarcane farmers immediately without any further delay. 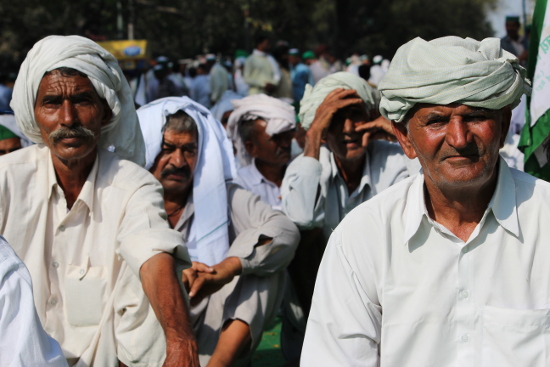 A lot of propaganda was made around the new Crop Insurance Scheme but statistics indicate that the insurance companies got more premium and farmers received very less compensation. So evidently it is only benefitting the companies. From the information received so far, it is clear that the payment of claim is delayed and insufficient. High actuarial premium rates were applied, only to bring the indebted farmers under coverage. The BKU demands that the Crop Insurance Scheme considers farmers as a unit. All important crops should be brought under its purview. In distressed areas where there is no threshold yield, potential yield should be used for those crops for which the average yield data is not available. Damage to wild animals, fire, damaged crops due to chilly to be applied at individual level.

All images by La Via Campesina