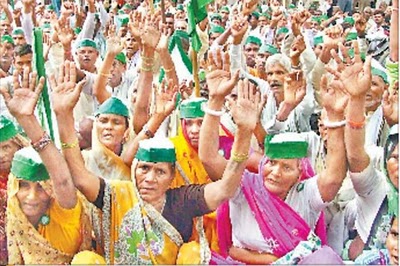 Last week saw massive protests and direct actions by members of the farmers organisation BKU in various parts of Uttar Pradesh. On the 22nd and 21st of July BKU carried out dharna’s, road blocks, gherao’s and panchayats at collectorate offices and other spaces in Fatehpur, Lukhnow, Bijnaur, Mirzapur, Ghaziabad, Muzzafarnagar and Amroha and Saharanpur all at the same time.

The local issues of concern were brought up before the district and additional district magistrates as well as a letters addressed to the prime minister were submitted to the local officials in all the sites. The issues ranged from exploitation of farmers by corrupt government officials, electricity cuts, unfair land grabs, lack of irrigation facilities, exorbitant input costs, non payment on time by sugar mill owners and deregulation and privatization of the sugar industry as well as demands to fix crop prices before the sowing season were made. They demanded that the minimum support prices of wheat be declared at 1500 Rs per quintal, of cane at 350 Rs, pulses at 6500 Rs and potatoes at 500 Rs respectively. The standing demand for Swaminathan committees recommendation to improve farmers incomes by adding 50% profit above cost price was also made- however the government has not seemed to have heeded this yet.

The road blocks and show of popular strength forced the district officials to come out of their offices and discuss the farmers demands.