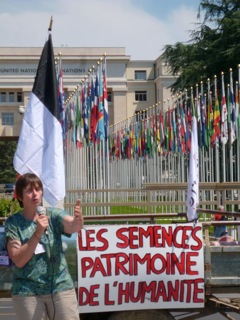 (Geneva, 18 June 2014) From June 11th to the 13th, a delegation of La Via Campesina partook in the 26th session of the United Nations Human Rights Council in Geneva in order to pursue its advocacy for the drafting of an International Declaration on the Rights of peasants and people working in rural areas.

This declaration stems from the international peasant movement called La Via Campesina which has been working on the stated project for over a decade. La Via Campesina, a movement composed of more than 160 peasants’ organisations across 70 countries, assumes the task of identifying the various discriminations faced by people working in rural areas (farmers, rural workers, nomads, fisher(wo)men, indigenous and landless peoples, etc.) and to determine – with the support of organisations such as FIAN International and CETIM (Centre Europe – Tiers Monde) – the inherent rights attached to this group of people.

After several studies undertaken by the Consultative Committee of the United Nations Human Rights Council, the Assembly (termed ‘Council’) accepted the final report in March 2012. In September 2012, it voted in favour of the resolution aiming at establishing an open intergovernmental working group in charge of drafting a declaration grounded on the project attached in the final report. In July 2013, this working group held its first working session.

Following the 26th Human Rights Council meeting, the member states will vote on a resolution calling for the renewal of the intergovernmental group’s mandate in order to further pursue the drafting of this declaration, on the basis of recommendations that will emerge out of the first working group meeting and from the consultative ones expected to be held between June and November 2014.

La Via Campesina places great emphasis on the pursuit of this line of work, which is why it sent three farmer’s leaders to participate in the aforementioned session: Ibrahim Coulibaly (CNOP – Mali), Geneviève Savigny (Confédération Paysanne – France) and Diego Monton (Cloc – Argentina). They all participated in a “parallel event” organised by the Bolivian and Filipino Ambassadresses on the topic of “Farmers’ Rights and International Year of Family Farming”. The panel was complemented by a video message by Mr. José Graziano da Silva, F.A.O. Director, and Mr. Christophe Golay from the Geneva Academy of International Humanitarian Law and Human Rights.

The Via Campesina delegation also participated in an open conference in Geneva and encountered several other African, European and Latin-American delegations.

Europe in line of sight

Starting from June 16th, this delegation will be replaced by a strong delegation from the Eurocpean Coordination Via Campesina representing France, Belgium, Portugal, Spain, Italy, Germany and Switzerland. The farmer’s organisations from the European region have since 2 to 3 months’ time worked on a plea addressed to their respective governments, calling for their support in favour of the resolution which will be discussed and up for vote during the upcoming session. As a matter of fact, the European countries have been the most proactive in this matter to date. Hence yet another symbolic action will take place on the Place de la Nation on June 17th at 11.30am when the European peasant’s leaders will meet the European delegations from the Human Rights Council.