Home » If we can produce our food, then we are rich!

From February the 22nd to the 24th 2008, about one hundred women farmers from 16 countries from all over the world took part to the seminar organized by ÖBV-Via Campesina Austria on Food and Power (« Macht Essen », litteraly « Power Eat »). 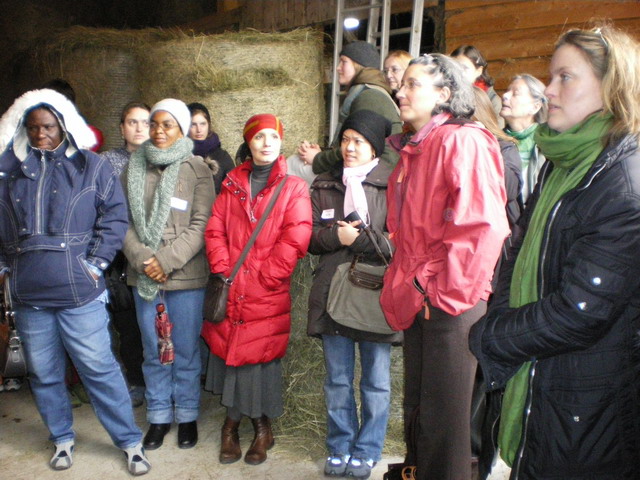 In Austria, where farms are relatively small, women are very often responsible of the farm while the men work outside. It is the case in Johanna’s farm that we visited on Friday. Johanna has about thirty dairy cows, as well as some pigs and hens, mainly for her own family consumption. She also has a small garden for vegetables. Her farm is organic, like 38% of all farms in the region, which makes it a very special place in Europe.

Johanna’s activity reflects the situation of millions of women in the world, whose primary work is to ensure the livelihood for their family and community. Indeed, many women farmers noticed that very often, men are involved in agricultural production when it is integrated in the « visible economy »  -that brings money, that is integrated in the trading system-, while women take part to an « invisable economy », which is absolutly essential for the survival of the people, but which is neither economically nor socially recognized as such.

Livelihood agriculture feeds the world, and not industrial corporate agriculture. But even so, power is in the hand of those who control the latest, most often men. This contradiction was in the heart of our discussions.

Power is very much linked with the control over the means of production, particularly land. Yet, many participant underlined how difficult it was for women to access productive ressources. For example in Nicaragua, only 2% of land are owned by women, which compels most of the women to depend on their husband to be able to cultivate. In Burkina Faso, while women do almost all agricultural work linked to millet production, they can not access the mills and they don’t get any revenue from the selling of millet. Thus, they are totally dependent from the money their husband accepts to give to them. But this situation does not only exists in Southern countries. In Europe too, few women farmers have the official status of farmer, though they do work on the farm. Because of this, they have access to social rights only as the wife of a farmer (specifically for pension, social security, etc…), which makes it very uncomfortable in case of a split. Even within our organizations, unless women struggle for equality, they won’t be able to make the decisions.

Yet, it is not only about a struggle for the rights towards men, but also, and maybe mainly, about a struggle to defend and strenghten livelihood economy towards trade economy. All the women that took part to the seminar underlined how strong were the attacks by corporate interests to take over the control of natural ressources (land, water, seeds and knowledges) and forbid peasants to live from sustainable family farming. For example, in Romania and Galicia, selling peasants’ products on local markets has be submitted to unaccessible rules after the entrance in the European Union, which has depived many women from their only revenue. Everywhere in the world, seeds company push for new laws which forbid farmers to use their own seeds and thus mke them completelly dependent from the industry.

Destroying livelihood economy is also done on behalf of an « expert knowledge » detained by scientists more or less dependent from corporate interests. An Austrian women told us about how difficult it was for her to sell her milk because Austrian sanitary authorities were promoting the idea that raw milk was dangerous for health. Similarly, many small-scales farms can not slaughter animls on farm anymore bacause of sanitary rules. Women are the first victims of this  « power of the experts » which denies their own capacity to know what is good or not and which forbids them to act outside of the framework defined by the institutions.

In front of these obstacles, all participantes underlined that the power they want is not to rule over other people, yet to be able to decide about their own life. Producing our own food is a key element in this way: « if we are able to produce our food, then we are rich! » did a woman say. Women farmers shared how proud they are to produce food for their community, to take care of the land where they live and to implement and share knowledges linked to the production and processing of food. They committed to struggle together to be able to keep cultivating the land and breeding animals, for equality with men and to stop corporate power over our food system.