Faced with the EU Bio-economy Strategy and the EU Presidency’s proposals on CAP reform that underpin the vested interests of the agroindustry, ECVC and ECO RURALIS, in Bucharest, reject these proposals and demand that human rights and peasants’ rights prevail in the new CAP, employing the Decade for Family Farming.

Bucharest, 3 June 2019 – Disguising business interests with citizens’ environmental concerns, biofuel production and the deregulation of GMOs were among the priorities on the agenda of the meeting of EU agriculture ministers in Bucharest, Romania, these last few days.

Also, but at the last minute, the Romanian Presidency of the EU requested that the reform of the CAP be dealt with in this Council, for which it sent a draft, with the aim of furthering negotiations ahead of the next Official Council meeting on 17 June, although there are countries that refuse to further discussions until the EU budget is concerted.

The Bio-economy Strategy was the guiding thread of the ministers’ debates, a plan aimed at “paving the way towards a more innovative, resource-efficient and competitive society”, which in concrete terms translates into the transferring of public funds to the largest private corporations and the expansion of their market. A proof of this -and considered a success story by the Romanian Presidency- is the Bio-based Industries Joint Undertaking (BBI – JU*), where corporations such as BASF, Total and Cargill operate.

In addition, the draft proposals on the CAP put forward by the Romanian Presidency, underpin the interests of the largest farms and industrial models, since it proposes eliminating the compulsory redistribution of aid.

Meanwhile, just a few metres from the EU event, ECVC, its Romanian member Eco Ruralis and a dozen small farmers’ organisations, and civil society from Europe and Central Asia, along with human rights experts, met in a series of thematic forums to bring the implementation of peasants’ rights to the CAP and the two regions.

The June 1 debate with institutions, peasants and legal experts explored the opportunities offered by the UN framework for the Decade of Family Farming for the implementation of the recently adopted UN Declaration on the Rights of Peasants, which would entail the creation of public policies in favour of small-scale peasants. The debates on the strategic orientation of the Common Agricultural Policy towards small family farmers were also deepened.

“A few days ago, in Rome, during the International Launch of the Decade for Family Farming, ECVC was officially integrated into the governance of this UN framework, as a member of the international steering committee. ECVC is developing links and opening policy space for food and agriculture, using UN instruments for the protection of our rights. Tens of millions of peasants expect from the EU process a shift towards a human rights approach, a response to the economic, social and climate crisis,” declares Ramona Duminicioiu, Romanian peasant, representative of ECVC.

“Today, in most countries, the income of farmers is on average half the income of the other citizens of each country. On top of that, the distribution of CAP income support that should compensate farmers for the EU’s policy of low production prices actually excludes 40% of European farmers and rather focuses on the 8% who receive 75% of the support. This is unacceptable” declared Jose Miguel Goncalves, representative of ECVC, in front of the EU Council of Agriculture Ministers’ venue in Bucharest, where ECVC and Eco Ruralis, together with other peasant and civil society organisations, came together in defence of a common agricultural policy rooted in peasant rights.

“We might think we’re paying for cheap food, but, really, this is costing the Earth. Environmental impacts from industrial farming, promoted by EU farming policies, like climate change, food waste, and biodiversity collapse are too high a price to pay.” added Stanka Becheva, from Friends of the Earth Europe, speaking on behalf of the regional alliance for food sovereignty, Nyeleni Europe and Central Asia.

See photos of the meeting here : 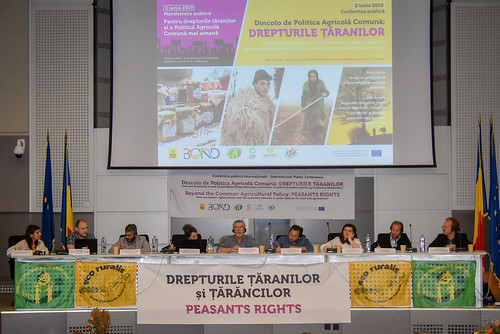 “The mission of the BBI JU is to implement, under the rules of Horizon 2020, the Strategic Innovation and Research Agenda (SIRA) developed by industry and validated by the European Commission” See link: https://biconsortium.eu/news/bic-welcomes-updated-european-bioeconomy-strategy-necessary-step-towards-reducing-global-ghg . Who is part of the BBI (Bio-based Industries Consortium)? BASF, Total, Cargill, Unilever, DuPont, P&G,… (the group had a turnover of 600 billion euros in 2015).