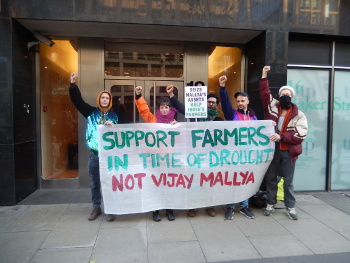 On the 30th of November, farmers from across the state of Karnataka in India, took to a unique protest outside “UB City”, one of Bangalore’s most expensive properties owned by controversial businessman Vijay Mallya. The farmers demanded that the commercial complex be auctioned off and the money from the proceeds be used to clear the loans that small farmers owe to cooperatives in the state.

A series of erratic weather conditions over the years and imbalance in world trade has plunged the states farmers into absolute distress, forcing them to default on small loans that they individually owe the local banks. They allege the administration of harassing small farmers for repayment of loans despite the acute rural distress, while big defaulters from the corporate world are allowed to walk free and escape accountability with ease.

For instance, Vijay Mallay’s Airline firm alone owe the banks 60 Billion Indian Rupees of which a public sector bank has already written off 12 Billion, as per media reports. Farmers are now demanding that their loans be written off too, especially with an impending drought and acute cash crunch in the country offering no respite.

Among the many demands put forth, are better compensation for damaged crops and also implementation of a comprehensive drought management plan.

This unique protest, led by farmers of Karnataka Rajya Raitha Sangha and Karnataka Jan Shakti network was also widely covered in the local media. It has now caught the attention of progressive civil society in Europe, with several institutions and farmers’ cooperatives sending out messages of solidarity with the protesting farmers.

A group in London also staged a protest outside Vijay Mallaya’s residence in London, where he seems to have escaped to after the Indian Government’s crackdown.

Here are a selection of images. To see the full collection, CLICK HERE.