Response from the Indian and international farmer’s movements
(Delhi, 31 March 2008)  Indian and international peasants movement are meeting today in Delhi to discuss and develop their solution to the current food crisis. Peasants, small farmers, landless farmers and indigenous people are facing harsh living conditions all over the world. It is also the case in India. Neoliberal corporate globalization driven by the WTO has forced countries to open their domestic markets to import agriculture products and to cut subsidies. As a results, farmers have been losing their livelihoods and even their lives. 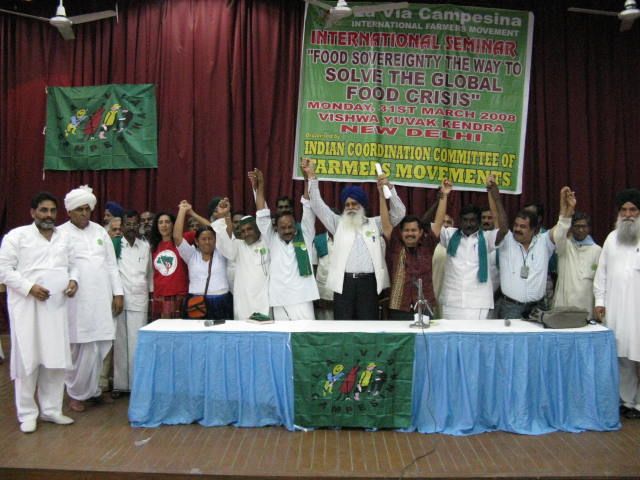 The Indian government is promoting massively so called “Industrial development” to compete in the world market. This requires large quantities of land, leading to massive land acquisitions for Special Economic Zones (SEZ), new roads, residential, commercial or industrial complexes. It is happening in many states such as in West Bengal, Karnataka, Haryana, Uttar Pradesh, Punjab…  For the moment, nearly 400 SEZ are already operating and another 350 are waiting for the approval. This is resulting in the displacement of small farm families in a large scale.

Policies of the Indian Government is a conspiracy to reduce the number of farmers in India. 67% of 1.10 billion of Indian population are farmers. Massive cheap food imports and the high cost of inputs are pushing this majority of the population into indebtedness.

More than 1,50,000 farmers have committed suicide in India since the country joined the WTO in 1995. The destruction of small farmers is a tragedy. It creates a loss of culture, livelihood, jobs and biodiversity in the rural areas.
A massive killing of small farmers is happening all over the world. La Via Campesina in solidarity with the Indian Coordination Committee of Farmers’ Movements is struggling against neoliberal corporate globalization and neo-imperialism in order to defend an other model of agricultural development.

La Via Campesina supports the demands of the Indian farmers to solve the current food crisis:
Agrarian reform: Farmers should have access to land in order to produce healthy food for local communities.
Food sovereignty: The country should implement policies to allow small scale farmers to feed their populations, respecting the local cultures, the environment and people lives.

Stop GMOs: Farmers should have the right to produce, improve and control their own seeds. Development of Crops with Genetically Modified Organisms in India would further destroy farmers livelihoods, people’s health and the environment.
Increasing domestic support to farmers: Small farmers need support from the government to keep producing food domestically and avoid imports of expensive food. The government should support the majority of the population instead of giving advantages to large companies.

Renowned farmers leader Ch.Mahendra Singh Tikait has been the victim of Government of U.P. since Ms.Mayavathi has taken over as the Chief Minister of U.P. There has been a continuous repression of the farmers movement in U.P.
In a biggest Democracy like India, Right to Freedom of expression is a constitutional fundamental Right.  And No government can suppress this right of the people.

Indian  coordination committee along with the support of the International Farmers Movement, La Via Campesina demands the interference of the Union Government and if necessary also the President of India to control the situation and to see that the Law is used to Protect the people of this country, not Powers and Political Parties.