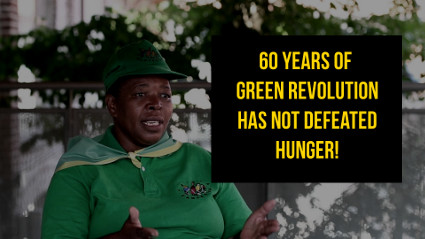 In a press note released on 23rd June, AbL (Small Farmers Union in Germany and member of La Via Campesina), along with FIAN Germany has called upon the German Development Ministry(BMZ), to put its focus on Small Farmers and agro-ecological practices.

Elizabeth Mpfou, General Coordinator of La Via Campesina, who is in Germany this week has said: “For 20 years we have been demanding agricultural and trade policies, which illustrates the principle of food sovereignty in order to change the increasing industrialization of the food system. The Green Revolution has for 60 years not defeated hunger. The German development policy must promote agro-ecological farming practices”

Although BMZ repeatedly recognises the importance of small farmers, it is yet to engage with La Via Campesina and its members on this front. “The Ministry for Development (BMZ) speaks often about small farmers, but rarely with them,” said Roman Herre of the human rights organization FIAN.

“Political exclusion and discrimination of rural social movements – in their countries and also here – are core causes of persistent hunger and poverty,” added Herre.

To read the full press release (in German), click here