Home » Geneva mobilisation : where is the real violence?

Via Campesina was present with an important delegation at the protest of Saturday 28 November against the World Trade Organization (WTO). The mobilization was strong with around 5000 people in the streets of Geneva. The objective of these people, as well as that of Via Campesina, was to demonstrate in a non-violent manner, but with a strong and radical message regarding the WTO. 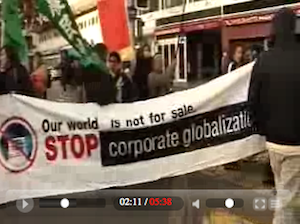 Because of the dramatic consequences of liberalization on peasant agriculture around the world, we ask that the WTO get out of agriculture. We regret that material violence did not allow us to express this message in front of the WTO building in Geneva. Without minimizing yesterday’s events, we remark nonetheless that another form of violence – social, political and economic – is directed on a daily basis towards a large part of the world population, including farmers. Let us not forget that one billion people do not have access to sufficient food. That violent political decisions criminalize certain unions on a daily basis: this was the case for our three Korean delegates who were not able to join us for the various mobilizations and who have been detained at the airport since Friday November 27th, 11 pm.

Our delegates traveled several thousand kilometers to come testify here in Geneva and propose alternatives. Since they were not able to do this during the demonstration, we invite journalists to take advantage of their presence in the coming days.

Complementary position of Uniterre on the Swiss aspects of the demonstration of 28 November: