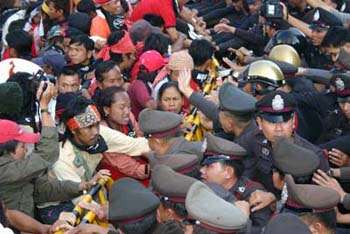 The victory of people’s movements at every WTO Ministerial Meeting since Seattle is not whether or not the meeting collapses, but the opportunities that many movements from around the world have; to meet, join hands in solidarity actions, learn from each other, and most importantly being inspired by each other. An article by Junya Lek Yimprasert from the Thai Labour Campaign

Movements are learning from each other: We are not losing the battle!
Protest, protest, and protest!
Bush may say and said so what? The WTO negotiation is still going on. Our government is still aggressively trying to rule the world, forcing many small and poor countries to sign FTAs with the US.

Yes, yes, that may be correct, but what is more correct is that “people will not stop fighting until we win.”

The victory of people’s movements at every WTO Ministerial Meeting since Seattle is not whether or not the meeting collapses, but the opportunities that many movements from around the world have; to meet, join hands in solidarity actions, learn from each other, and most importantly being inspired by each other.

Over 100 women and men leaders from 19 peoples’ network throughout Thailand joined the Via Campesina camp at the WTO People Forum in Hong Kong from December 10-19.  For many of them, it is their first time stepping foot outside Thailand. And it is not a holiday, as they are not sleeping in five star hotels, but in the farmers’ camp. They were not given flowers to welcome them, but were faced with pepper spray and tear gas from the Hong Kong police. And of the over 900 people arrested in Hong Kong on 18 December, Thai delegates were the second biggest group — 79 Thai delegates were arrested including 25 women who were detained for 24 hours and 54 men who were detained for 48 hours.

Almost immediately afterward many international campaign actions took place in front of Chinese Embassy’s and numerous letters of protest were emailed and faxed to the Governor’s House in Hong Kong, most people were released, included all the Thais.

Right at the spot when they met with us at the international airport upon returning to Bangkok, the Thai delegates were saying to us,
“We want to be like the Koreans”,
“We are so impressed with the actions of Korean farmers”.
“They are so committed and organized.”
“The Hong Kong people are so nice to us; they give us water and food”.

They kept saying these things to those of us who went to the airport with the banners saying “Well done 100 fighters”. And “Welcome back home”.. They all were just released from detention centers or prisons in Hong Kong and returned to Thailand

That is the most impressive picture for all of us who were there that day. We were in such high spirits and many of us felt sorry that we didn’t join the protest in Hong Kong.

Yet, we didn’t wait too long to see the results of what they are so impressed and kept talking about. After a month of the Protesting the WTO, Thai peoples’ movement have another big challenge ‘Stop Thai-US FTA’ Negotiation in Chieng Mai, Thailand from 9 to 13 January 2006.

The location of the sixth round of Thai US FTA negotiations was suddenly changed from Phuket to Chieng Mai only 3 weeks before the meeting took place. With so little time, the preparation meeting among peoples’ network and secretariats could only organize on 24 December.  For three weeks over 50 people have been  working ‘non stop’ in preparation and mobilizing their members.

Many people volunteered to work on the preparation, though knowing that they would not have time to enjoy a holiday season. ‘Forget the New Year holiday celebration’, many of us had said. We know very well that “If  the Thai – US FTA passes it means the loss of Thai people’s sovereignty”, anyway.

The protest strategy planning groups were among those who had gone to protest the WTO in Hong Kong. Many methods they have learned, mostly from our Korean comrades, were discussed on how to adopt for this “Stop FTA” protest.

The Manager Newspaper[1], a critical Thai newspaper, has a long critique on this FTA protest, saying that “There is no other protest that can mobilize 10,000 people just on one specific issue like this before. Also, the protesters have a capacity in communicating with the public in a wider range. It was very systematic in organizing the protest, good division of responsibilities, many strategies have been applied, and it can make the public listen and feel sympathetic with the protesters; that is what had not happened before. Some said that this protest is done in international manner, not different from the protest against globalization in Seattle, USA or at Cancun, Mexico”.

Yes, it cited the leaders of the mobilizing team, Prayong Doklamyai, who said that “ We have divided teams to look after their members, one for 20 people, this one have red banner on their neck…The second leadership teams are three representatives from each movements who are to be making decisions. These groups of people were wearing a green banner. The third group of teams are those 300-500 youngsters who are strong and experienced demonstrators, disciplined and are 100% committed at heart, they carry a black banner”.

Suriyan Thongnu-eid, another leader added that “we have to accept that those volunteers wearing black banners were winning the hearts of protestors. They have secret meeting among themselves, knowing very well that they will be faced with violent action. Being arrested to them is the symbolic of their bravery. The black banner is their medal of honor”.[2]

Stop Thai-US FTA protests in Thailand, though it did not fully stop the negotiation this time, it did win the hearts and understanding of many groups in Thailand; including senators, opposition MPs, academics and the general public. Most importantly this protest has gained the belief among the members of people’s movements from around the country, especially from  11 networks that joined the struggle, namely: HIV/Aids networks, Assembly of the Poor, Small Scale Agriculture network, Consumers Federation, The Network of Land and Forest, The network of Urban Poor, Northern Farmers Federation, State Enterprises Labour Relations Confederation, Students Confederation of Thailand, Network of People organization in Thailand and the FTA Watch. The final statement of the 11 networks states “We will closely monitor the FTA…If the government breaks the promises giving to us, we will return to protest in front of Government house in much greater numbers.”

Many tactics used by people’s movement from around the world in their protests in Seattle, Cancun and lastly Hong Kong are now seen in Thailand. As well I do believe that it is going to be seen more and more in many countries and that is the people’s victory, which in the end is the belief in people power and that if they are fighting with the dignity of human beings they cannot be defeated.

Note:
On 16 January, 1,500 farmers in Northeast of Thailand, from protest against dam construction, Potash mining, land and forest, against Eucalyptus plantation, surrounded PM Thanksin’s car. Thaksin had to get out of the car and talk to the protestors and gave a promise that he will have a discussion with the groups on 24 Jan.

The same day, 70,000 teachers had their biggest gathering to protest against teachers’ reform.